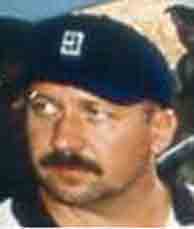 The current issue of The Economist includes a profile of Viktor Bout, the so-called “Merchant of Death,” who until his capture earlier this year in a DEA sting operation in Thailand, was the dean of the world’s black market in illicit weapons. The piece is a history of sorts, detailing Bout’s sordid dealings with Third World dictators in search of the all-mighty dollar. It also describes the sting that brought him down last March—and graciously cites Mother Jones as having published an earlier detailed account of the operation.

Bout’s story is the stuff of legend and perfect fodder for filmmakers. Nicholas Cage played a fictionalized version of the Russian arms dealer in the 2005 film, Lord of War. (Bout reportedly was not a fan of Cage’s performance). According to the Guardian, Angelina Jolie is also set to play a UN arms investigator obsessed with busting Bout’s network in a film due out in a year or two.

Turns out we won’t have to wait that long to hear from Bout himself. Today in Bangkok, the arms dealer took the stand for the first time to fight against his planned extradition to the United States to face terrorism charges. Clad in the same orange prison outfit that has been his uniform for most of the year, Bout pleaded innocence. Never mind that he was caught with his hand in the cookie jar: sitting down with what he thought to be members of the Colombian FARC to discuss supplying them with guns, ammunition, and helicopters equipped with rockets. After all, the guy has a number of conflicting alibis: his wife says he was in Bangkok to take a cooking class; his bodyguard says he was there on vacation and to visit a medical center; Sergei Ivanov, a member of the Russian parliament, says he was there gathering “information on the aviation and construction business.” It’s all the same to Bout, who claims that whatever he was doing in Bangkok, it most certainly wasn’t to sell weapons. As he told the court:

I never met or talked to anyone from FARC… I didn’t do anything wrong in Thailand. I have never been to Colombia or the United States…I did not commit any terrorist acts… The US is trying to use this to cover up its internal problems and prevent good relations between Thailand and Russia.