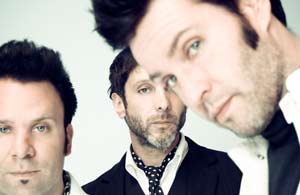 What do you do if you’re making experimental films in Buffalo and you need a cool soundtrack? Well, you grab some friends and start making music, and eventually you become Mercury Rev, a band whose combination of psychedelic experimentation and melodic purity have made them longtime critical favorites. While the combo has had a famously rotating lineup, the current core group of singer Jonathan Donahue, guitarist Sean “Grasshopper” Mackowiak and drummer/keyboardist Jeff Mercel has been intact since 1998’s Deserter’s Songs. The band released two albums in September: Snowflake Midnight and a free-to-download bonus album of instrumentals called Strange Attractor. They’re currently in the midst of a US tour, and I managed to catch Mercel on the phone before a sound check in Chicago.

Okay, nothing against Buffalo, but I’m just wondering, is there a connection between adventurous American bands and really boring towns? I’m thinking of Flaming Lips in Norman Oklahoma, and maybe Grandaddy in Modesto. Is this all about being forced to come up with your own entertainment?

[Laughs] Well I guess you make your own fun. I think that could well be part of it. Also, when you come from a smaller city there isn’t that sort of “scene,” there isn’t that school like there is say in New York, or Seattle in the 90s. Maybe it’s good to come out of that setting, as opposed to being one of many bands. You really develop your own character, your own sound, your own thing, because it’s not that you’re working in a vacuum, but you’re working in a different setting. Even now, where we live in the Catskills, it’s a much more laid back sort of place, there isn’t the constant pressure or comparison to other bands. I find it much easier to do your own thing without worrying about what the current trend is. That being said, I spend half my time in Brooklyn as well and I haven’t noticed any negative effects.

Well, one way I think the small-town or country lifestyle does have an influence is that while some people say you’re the “psychedelic freakout” band, I think you’re often making very pure, delicate, spacious and lovely music. I’m thinking tracks like “Endlessly” or “Opus 40,” those could be in a Disney movie. I mean that in the best possible way. Am I crazy?

It’s a valid point. It’s representative of the fact that our influences are fairly diverse, and there’s as much room for George Gershwin as there is for Sonic Youth in our palette, if you will. And often times it’s the deliberate play of those two elements, serene beauty versus extreme bombast, within 30 seconds in the same piece of music, that we find intriguing. That’s something we definitely worked with on Snowflake Midnight, the unpredictability of that, where we were assembling songs by cutting up different pieces of music that we’d been working on, and deliberately working at these strange and sometimes uncomfortable juxtapositions. So you’ve got that very pastoral thing that you’ll find in some songs, paired with a very aggressive, or bombastic, or chaotic element. We enjoy both and we acknowledge that both do exist simultaneously whether it’s in music or in life in general.

Too true. The new album also focuses a little bit more on electronic sounds, and honestly kind of reminds me of the KLF or the Orb. You worked with the Chemical Brothers a few years back as well, so was there any specific inspiration for this new direction?

It wasn’t like we went out and bought a whole bunch of records and said “well we want to sound like this or that.” It was something quite simple: we moved our studio a couple times in the process of making this record and ended up in a very small room, and we purged a bunch of our gear. We were left with a different palette of tools, and I think that started the chain reaction that led to the sound you hear. At the same time, we were also conscious that we did want to make a record that we felt was different for us. You pull away your safety blanket sometimes, you knock out the underpinnings that you typically have. That led to the more electronic nature of this record. We were conscious of not using some of the tools we’d used in the past. Grasshopper didn’t pick up a guitar, I deliberately didn’t get behind a drum kit for many many months.

A lot of us critic-types are currently obsessed with best-of lists, and Snowflake Midnight has ended up on quite a few of those lists this year. Any albums that you or the band have as favorites from 2008?

I am definitely a fan of the Fleet Foxes record, I thought that was a real breath of fresh air, it’s a gorgeous record. A pure fun side of me also loves the MGMT record. I was actually looking on Mother Jones earlier today and saw your thing about the polls, and everybody’s talking about the TV on the Radio album which I haven’t heard yet, so I have to do some homework. But I was reading the Rolling Stone list and, uh, the Jonas Brothers were in the Top 50. So I guess I should go buy a Jonas Brothers record.

So I’ll look forward to the Mercury Rev hip-hop album in 2009?

Don’t hold your breath on that one.

Snowflake Midnight is out now on Yep Roc records, and the accompanying album Strange Attractor can be downloaded for free at the band’s web site.