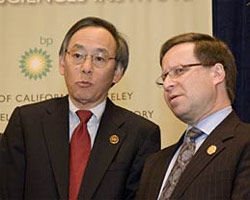 Steven Chu, President-elect Barack Obama’s choice to lead the Department of Energy, seems about as climate friendly as they come. As a Nobel Prize-winning physicist and director of the DOE-funded Lawrence Berkeley National Laboratory, he has dedicated his career to weaning the globe from petroleum. But Chu, who declined to comment for this story, is also more industry friendly than his rhetoric suggests. Last year he sealed a deal between the Berkeley Lab, two public universities, and oil company BP, creating the largest university-industry alliance in US history, the $500 million Energy Biosciences Institute, to conduct biofuels research. The proposal sparked fierce opposition from faculty and students at the University of California-Berkeley, which will host the institute. Biology professor Ignacio Chapela called the partnership the “coup de grace to the very idea of a university that can represent the best interest of the public.”

Chu’s role in creating the Energy Biosciences Institute may inform his approach to governing the Department of Energy, a major governmental underwriter of research, and one that will face pressure to partner with corporations in pursuing technological solutions to climate change. As the incoming Obama administration prepares to spend liberally to develop cleaner sources of energy, the structure of corporate-government partnerships will determine how the profits of that research return to taxpayers, and how rigorously scientists evaluate the downsides of controversial technologies such as biofuels.

In 2004, when Chu left a teaching job at Stanford to direct the Berkeley Lab, research partnerships between oil companies and California universities were in vogue. In 2002, Stanford had formed the Global Climate and Energy Project with $225 million in funding from General Electric, Toyota, ExxonMobil, and oil-services company Schlumberger. In 2006, UC-Davis established a biofuels research project with $25 million from Chevron. Capitalizing on the momentum, Chu pitched the BP deal as a natural evolution of the new research paradigm. “The motivation is that you have to start working with companies at the get-go,” he told a March 2007 meeting of the UC Berkeley Academic Senate. “I think the University of California-Berkeley and the Berkeley Lab are the perfect place for this, so you can…get largely CO2-neutral fuels in a responsible way, in a way that is sustainable.”

The last time UC-Berkeley attempted anything like the BP partnership, it sparked sharp rebukes from academics. In 1998, Swiss biotech firm Novartis gave $25 million to Berkeley’s Department of Plant and Microbial Biology; in exchange, the department granted Novartis first right to negotiate licenses on many of its discoveries and two of the five seats on the committee that determined how research money would be spent. But many faculty members worried it would steer campus research toward a corporate agenda, and an outside review of the partnership commissioned by the university echoed those fears, concluding that Berkeley should foster debate on new research agendas, protect academic freedom from interests in commercialization, and avoid deals “that involve complete academic units or large groups of researchers.”

Last year, Berkeley administrators tried to prevent similar protests from marring the BP deal. More than six months before it was signed, Chu and his allies held several meetings to address the concerns of students and faculty. At one such campus gathering in March, Chu detailed the benefits of converting switchgrass into a biofuel, then pointedly asked why the research wasn’t being pursued. “The answer is money,” he said. Next, he showed a timeline of the university’s application for BP funding. “I want to make clear that as soon as we had a chance to apply,” he said, “the Academic Senate was included.”

And yet the Academic Senate was divided on the proposal. At one meeting, a third of those present voted for the right to intervene in the deal based on qualms about its financing. Berkeley professor Robert Reich, the former US labor secretary, wondered if the university had sufficient safeguards to prevent BP from undermining the university’s academic freedoms and reputation. “It seems to me the quality of these safeguards will determine whether this [Energy Biosciences Institute] proposal will be a huge feather in Berkeley’s cap,” he said, “or a huge noose around Berkeley’s neck.”

To underscore those stakes, Reich detailed the pitfalls of Stanford’s Global Climate and Energy Project, noting that its partner, Exxon, had in the past funded climate-change deniers. Shortly after the Stanford project was announced, Exxon took out ads in the New York Times proclaiming its “new alliance with the best minds at Stanford.” The ad bore the official Stanford University seal, was signed by a professor heading up the GCEP, and read, “Although climate has varied throughout Earth’s history from natural causes, today there is a lively debate about the climate’s response to the presence of more greenhouse gases in the atmosphere.” (BP’s spin has been much shrewder.)

Later in the Academic Senate meeting, Berkeley chancellor Robert Birgeneau told faculty that if BP hadn’t come along, the university would have sought to partner with another oil company anyway. “Chu lent credibility to that argument,” Berkeley journalism professor William Drummond, who chaired the Academic Senate at the time, recalled in an email. “In addition, if you ever meet Chu, you’ll see what I mean; he is persuasive. I guess you have to be to win the Nobel Prize.”

Ultimately, opposing groups of Berkeley faculty reached a compromise. They created a group of four Academic Senate committee chairs to advise the university in contract negotiations with the company. Signed seven months later, the 10-year contract provided $50 million a year from BP, with $15 million earmarked for proprietary research to be conducted behind closed doors by a staff of 50 BP scientists on campus. The universities would supply another 100 scientists, who would work with BP on public research. BP would receive a nonexclusive, royalty-free license to any public research discovery and the right to negotiate an exclusive license with royalties capped at $100,000 per year (with exceptions for “a breakthrough technology of a revolutionary nature”).

One last-minute change to the contract was particularly favorable to BP. The institute’s governing board, which approves broad policy, the budget, and all research projects as a whole, was reconfigured from five members, with BP given a minority vote, to eight members, with BP given half the votes. “The compositions of the governance board and the executive committee were a compromise,” wrote UC-Berkeley spokesman Robert Sanders in an email. “Because BP was putting up so much money, they wanted strong representation on the governance board.” The university agreed to the change, he added, because the split representation would encourage a collaborative approach to decision making.

Throughout the BP-Berkeley debate, few environmental groups took a position on the deal; it had, after all, raised a complicated mix of pros and cons. One group that did weigh in was Greenpeace USA, which joined the Foundation for Taxpayer and Consumer Rights to request that Berkeley delay signing the contract. When I called Greenpeace spokesman Glenn Hurowitz yesterday, he seemed hopeful about Chu’s nomination as energy secretary and said, “We’re excited by how seriously he takes the global warming challenge.” But, he added of the BP deal, “Giving major polluters the ability to control the data and flow of results about our energy future is really troubling… We hope that whoever is energy secretary won’t rely on big oil for research into clean energy.”

Corrections appended: An earlier version of this story incorrectly stated that nearly half the UC Berkeley Academic Senate “voted for the right to intervene in the deal based on qualms about its financing;” the actual number was closer to a third (32 percent). In addition, the earlier version said that the environmental nonprofit Greenpeace supported Obama’s appointment of Chu for Department of Energy head; the group says it has no opinion. We regret the errors.