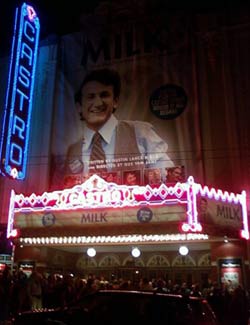 Braving the round-the-block lines at the Castro theater for an opening-weekend showing of Milk seemed like the right thing to do (see my cell-phone photo of post-screening mayhem at right), and the hour-long wait was made kind of enjoyable by the almost celebratory atmosphere of the crowd, which turned practically giddy once we filed in. Milk is a work of art, a reality-based fiction, but after a year of stumbling across the film crew all over town, and finally sitting in a theater across the street from Harvey Milk’s old photo shop, one couldn’t help but feel a sense of being a part of history. Milk is a good film, with very good performances, but its story and message are so pertinent today, I couldn’t even try to remove that from my consideration of it as a movie. So, there are a few spoilers after the jump.

Milk is, almost by necessity, something of a sequel. The 1984 documentary The Times of Harvey Milk covers the same convulsive moment in San Francisco history and is a profoundly moving film (rightly given an Oscar), raising a still nearly-unfathomable series of events to the level of art, of myth. Milk can’t and doesn’t even try to compete, opening and closing with footage culled straight from the documentary, then focusing on forceful portrayals of the central figures and a cautionary connection to current events. It does both well, but the latter most astonishingly.

One of Harvey Milk’s major victories was the 1978 defeat of Proposition 6, a ballot initiative that would have banned gays and lesbians (and supporters) from working in public schools. The fight against Prop 6 takes up the central section of Milk, an unexpected triumph coming so soon after Harvey’s election to San Francisco Supervisor. At our Castro screening, the audience hooted at local references, applauded at well-known personages’ entrances, and hissed at Anita Bryant, but as the Prop 6 fight played out on screen, a sickened silence seemed to fall over the crowd.

From the beginning of Harvey’s political career, he had seen gay visibility as the only path to gay acceptance, an option that was much more dangerous in the 1970s than today. But Harvey refused to back down, and over and over again, the parallels between Prop 6 and the recently passed Proposition 8 banning gay marriage are plainly, tragically apparent, except, of course, we lost the more recent battle. In 1978, the No on 6 campaign seemed to want to run an abstract, tentative, “closeted” campaign, but Harvey was able to overcome this with his political power and sheer force of will. Those of us who watched the “No on 8” TV ad featuring a friendly old straight couple discussing their invisible gay daughter as if she’s some sort of radioactive mutant they’ve come to accept only through determination and the use of protective lead aprons will find this tendency all too familiar, and once again, Harvey was proven right.

Some of the film’s focus on the personal details of Harvey’s life seemed a little bit, well, “Behind the Music,” always a danger when historical fiction fills in the blank spots in heroes’ lives with domestic squabbles. But two moments, one factual and one speculative, were powerful reminders of what Milk could do that the documentary couldn’t. A few days before his assassination, Harvey attended a performance of Tosca, which Van Sant shows us. We’re presented with the opera’s climactic moment of tragedy, murder and suicide, against a backdrop of a grand city on a hill, crowned by a dome-topped building. Later, when former supervisor Dan White shoots Harvey in San Francisco’s domed and gilded City Hall, we’re shown that as well, in all its stark brutality, a moment I had no idea Van Sant would dare to depict, and it comes as a shock. Harvey falls towards the window and sees the banners for Tosca on the opera building across the street, terrible realization in his eyes.

Is this better or worse than the documentary, a tasteless reenactment or a vital illustration? I’m not sure. Milk ends on a high note, with the unexpectedly massive candlelight march and a brief flashback to Harvey and Scott in bed, while the documentary continued into the infuriating travesty of White’s trial, but our audience still filed out in a morose fog. The physical loss of Harvey had been made horribly real, and the need for an unapologetic leader was made all too clear. Where was our Harvey? Could there ever be one again?

On the other hand, is the unflinching look at Harvey’s death exploitative? And why is it, as the Los Angeles Times put it, that “gay roles that win Academy Awards for actors almost always must suffer ghastly deaths”? Boy, tell me about it. Yes, this is a true story, and yes, it’s an adage that great art must depict at least one tragic death. But why is it that only the stories where the queer gets murdered get made into movies? Well, that argument leads down spooky social-realist paths, so I’ll leave it for smarter people to discuss. What I do know is that if some schmaltzy drama about how car crashes are the only thing that really bring us together beats Milk at Oscar time, I’ll be the first to start the riots.