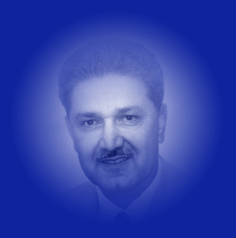 Thanks to Paul Kerr at TotalWonkerr for catching this. Dr. A.Q. Khan, who once led the world’s most expansive nuclear smuggling network, an archipelago of shady businessmen and shell companies that conspired to supply nuclear weapons technology to Iran, North Korea, and Libya, among others, has been under house arrest in Pakistan since 2004. Virtually no one has been allowed access to Khan since Pervez Musharraf’s regime, under extreme pressure from Washington, supposedly shut down his operation. US intelligence agencies have yet to debrief him, and the full picture of his proliferation network is not fully known. Despite Khan’s demise, we can’t even be certain that the smuggling network he assembled has gone completely dark.

In short, Khan has become one of the most guarded figures in the world, a secret wrapped inside a riddle inside an enigma. Not a guy who would have a personal web page, right? Wrong. Khan has long been an inveterate self-promoter, and house arrest appears to have done nothing to dampen his unfailing enthusiasm for himself. His site (click here) is a classic work of hagiography, extolling his virtues and saying nothing of his decades-long adventure on the nuclear black market.

Khan has never been one to suffer nosey questions from journalists. The few interviews he has granted have typically looked something like this:

Reporter: Do you have any hobbies, and how do you relax after a strenuous day?

Khan: I used to go fishing, fly kites, and play hockey in my young days. Then I played volleyball at university. Now it is so difficult to do these things. I do some walking, and play with our dogs and cats. It is very relaxing. I also read quite a bit. We go to bed very late, usually after midnight, as my wife is also always doing something, knitting, reading, etc.

Not exactly the smart, fearless journalism one would hope for. But this is the face that Khan presents to the world—that of the selfless hero, martyr for Pakistan, who gave everything for his country, and if his website is to be believed, was stabbed in the back by a corrupt dictator in the pocket of the Americans. (“I was treated like a traitor and by my own President,” Khan recently told a German reporter. “The result was that he became one of the most hated people in the country and can’t move around freely with security because of it.”) His accusation of scapegoating seems spot on, actually, as it defies reason that the Pakistani government could have been unaware of Khan’s smuggling and did not in fact sponsor his activities on some level. At least that’s the consensus view among those who’ve studied his case… and a strong argument for why the Pakistanis have yet to make Khan available for interrogation by the CIA.

All that aside, it’s enlightening (and not a little darkly comic) to read the life story posted to Khan’s page. (It’s written in the third person, presumably by an adoring sycophant.) My favorite passage is here, which seems to sum up Khan’s warm feelings for himself: “It is rare that a person in single life time accomplishes so much. This is done only by men who are endowed with special abilities by God and who prepare themselves through hard work and devotion to fulfill the mission of serving mankind.”