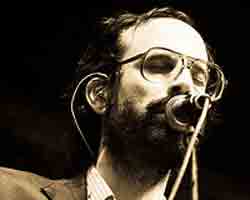 Last week, popular indie rocker David Berman dropped a bombshell on his fans. Two, actually. First he announced that he was disbanding the Silver Jews, the group that he founded in 1989 with college friends who would later go on to form the band Pavement. The 42-year-old front man said he’d even decided to leave the music business altogether. Then, in a separate posting on the message board of his longtime record label, Drag City, he revealed what he described as his “gravest secret,” one “worse than suicide, worse than crack addiction.”

The skeleton in his closet is his father, lobbyist Richard “Rick” Berman, who wears the nickname “Dr. Evil” with pride. The elder Berman’s exploits are so notorious—and in a field not known for its scruples, that’s saying a lot—that the watchdog group Citizens for Responsibility and Ethics in Washington recently devoted an entire website to exposing him. Through his firm, Berman and Company, the one-time labor lawyer presides over a constellation of industry-backed front groups, which specialize in countering activist campaigns targeting smoking, drunk driving, junk food, mercury in fish, and other consumer issues. (The Huffington Post reported on Tuesday that Berman was among those working to undermine the Employee Free Choice Act, which would make it easier for workers to unionize.)

Over the years, Rick Berman’s line of work has weighed heavily on his son, who tells his fans that the shame of his father’s profession made him thirst for justice. (A Drag City spokeswoman confirms that the posts on the label’s message board are authentic.)

“My father is a despicable man,” Berman writes. “My father is a sort of human molestor [sic]. An exploiter. A scoundrel. A world historical motherfucking son of a bitch.”

His clients include everyone from the makers of Agent Orange to the Tanning Salon Owners of America.

The worst part for me as a writer is what he does with the english language.

Though vicious he is a doltish thinker and his spurious editorials rely on double think and always with the Lashon Hara.

A few years ago, David Berman says, he laid down the gauntlet with his dad and demanded he shut down his operation—a real Luke Skywalker/Darth Vader moment, one imagines. The high-priced lobbyist refused, according to his son. “He has just gotten worse. More evil. More powerful. We’ve been ‘estranged’ for over three years.”

Rick Berman told Mother Jones in a statement: “I love my son and am proud of his accomplishments. Any disagreement we might have is a personal matter and, though I can’t speak for David, should be dealt with privately. I hope that the media will respect our family’s privacy.”

Beyond being a talented songsmith, with a devoted following and more than a few indie hits under his belt, David Berman has also won praise for his poetry and cartoons. He seems to view his career up to this point as an effort to repent for, if not counter, the sins of his father. “In a way,” he writes, “I am the son of a demon come to make good the damage.” But he recently arrived at the conclusion that his art and music were not enough. “This winter I decided that the SJs were too small of a force to ever come close to undoing a millionth of all the harm [Rick Berman] has caused. To you and everyone you know. Literally, if you eat food or have a job, he is reaching you.” He goes on, “Previously I thought, through songs and poems and drawings I could find and build a refuge away from his world. But there is the matter of Justice. And i’ll tell you it’s not just a metaphor. The desire for it actually burns. It hurts. There needs to be something more. I’ll see what that might be.”

What’s next for Berman? After his last show with the Silver Jews on Saturday, which will take place at Tennessee’s Cumberland Caverns (the performance will literally take place in a cave), Berman suggests he may try his hand at “screenwriting or muckraking.” If he opts for the latter, it’s not hard to guess what—or, rather, who—his first subject will be.

Photo used under a Creative Commons license from richt/tlobf.