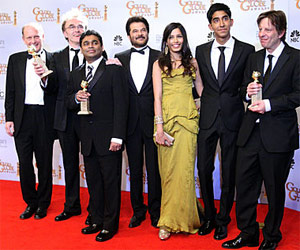 Last night’s Golden Globes ceremony was, as Vulture put it, “astonishingly not-bad,” with multiple surprise winners and cheeky speeches (see some of those after the jump). Hollywood bad boys Mickey Rourke and Colin Farrell got Best Actor nods, which you have to celebrate if only for the “holy crap what will they say on stage” anticipation, and every 30 Rock win brought us a hilarious acceptance speech. But the most inspiring moments of the night came with the non-stop cavalacade of wins for rags-to-riches drama Slumdog Millionaire, which grabbed four awards including best dramatic picture. Other heavily-favored and multiple-nominee pics including Benjamin Button and Frost/Nixon came away empty-handed, but the unabashed joy of the Slumdog team at every win made it impossible not to root for them. Plus, there’s the fact that the film’s success has “virtually the entire Desi population on the planet energized,” as MTV News put it. Slumdog‘s wins also seem like a long-overdue nod to Bollywood, despite the fact that the flim has about as much to do with Bollywood tradition as Crouching Tiger Hidden Dragon did with martial arts movies. So is there anything to stop Slumdog from winning the best picture Oscar?

Golden Globe best picture winners have been Oscar predictors only about 2/3 of the time—last year’s dramatic picture winner, No Country for Old Men, lost the Oscar to Atonement, and the comedy/musical winner, Sweeney Todd, wasn’t even nominated. But this year, Slumdog Millionaire has been racking up awards with increasing momentum, and, as Associated Content put it, the competition is dropping like flies:

The Curious Case of Benjamin Button was the original favorite, but has lost a lot of ground due to Slumdog Millionaire‘s rise and some very mixed reviews. Milk may be a sleeper, but most expect that homophobes in the Academy will stop it from winning, like they supposedly did for Brokeback Mountain. Films like Frost/Nixon and Doubt are not regarded as serious threats to win, while The Dark Knight is just trying to get in, and countless other contenders have fallen off the map this Oscar season.

Homophobes aside, even San Franciscans are starting to acknowledge that our hometown favorite may not be quite Oscar-caliber. Amazingly, Slumdog hasn’t even opened yet in India, and success there could make denying the top prize to what the Wall Street Journal called “the film world’s first globalized masterpiece” next to impossible.