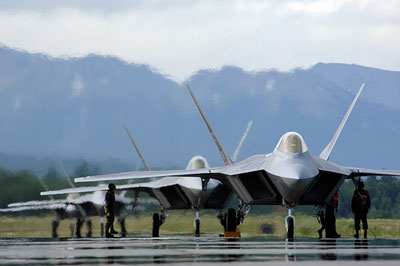 Photo by flickr user <a href="http://www.flickr.com/photos/lockheedmartin/1891950591/">Lockheed Martin</a>. Used with permission.

Representative Barney Frank is one of the most powerful Democrats in the House of Representatives. As chairman of the Financial Services Committee, he’s overseeing the spending of hundreds of billions of dollars to bailout Wall Street and stave off the mortgage crisis. The White House needs him, and he’s been a dependable ally so far. Now he’s leaning on President Barack Obama to cut the Pentagon budget.

On Tuesday, two days before Obama presents a proposed budget to Congress, Frank (D-Mass.) and other House Democrats called on the Obama administration to reduce military spending, setting up a potential clash between House liberals and the White House. At a White House summit on fiscal responsibility the day before, Obama had cast doubt on the future of an $11.2 billion project to upgrade the fleet of presidential helicopters. But Obama has shown no indication that he plans to reduce, or even freeze, overall defense spending, which will be around $650 billion this fiscal year.

Frank says that’s a mistake. “To accomplish his goals of expanding health care and other important quality of life services without ballooning the deficit,” Frank noted, Obama has no choice but to decrease military spending. He said that spending excessive amounts of money on the defense budget “precludes” the Obama administration from addressing other priorities: “If we do not get military spending under control, we will not be able to respond to important domestic needs.”

Acknowledging that Obama does plan to save hundreds of billions of dollars by withdrawing from Iraq, Frank said the President must go further and take big whacks at big-ticket military projects. He pointed to programs like the Air Force’s F-22 fighter, the Osprey troop transport, and missile defense as expensive, unnecessary Cold War-era boondoggles. He singled out missile defense in Eastern Europe as a particularly wasteful use of American taxpayers’ money. “I will confess that I am not a regular reader of Iranian-issued fatwahs,” Frank quipped. “And probably one of the ones I missed was the one where they threatened devastation against Prague. We plan to spend several billion dollars to protect the Czech Republic against Iran. That’s either a great waste of money or a very belated way to make up for Munich.”

Other House liberals, including Reps. Lynn Woolsey (D-Calif.), Barbara Lee (D-Calif.), and Dennis Kucinich (D-Ohio), joined Frank’s call. They noted that having the influential and sharp-tongued Frank leading the effort would help them in the always-tough battle against Pentagon waste.

But don’t look to Congress to reduce military spending on its own, Frank said: “Left entirely on our own, the Congress will not do the cuts in the military budget that ought to be there.” Military spending cuts will only come, he said, if there’s grassroots pressure for them.

Frank noted that in the Pentagon budget fight he’s up against some heavy hitting Democrats—including Rep. Ike Skelton (D-Mo.) and Sen. Carl Levin (D-Mich.), who chair the House and Senate Armed Services committees, respectively, and who “are not where I am” on military spending. Asked whether he could win over the Blue Dog Democrats and other “fiscally conservative” legislators who often oppose domestic spending but rarely complain about military expenditures, Frank flipped open his suit jacket, and asked, “Do you see a magic wand here?” He insisted that voters who live in the congressional districts of the members should “help us.”

Presumably, Frank would like to see grassroots pressure also applied to Obama. He spared the White House any tongue-lashing. And, no doubt, he realizes that it will be an uphill battle to downsize the Pentagon significantly. He’s not new to this struggle. For years, Frank has railed against excessive military spending. This time around, he has more clout then ever. Will he use it?