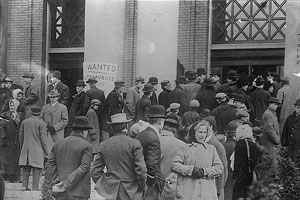 “If there’s anyone out there who still doesn’t believe this constitutes a full-blown crisis,” President Barack Obama said Monday night in his first prime-time news conference, “I suggest speaking to one of the millions of Americans whose lives have been turned upside down because they don’t know where their next paycheck is coming from.” Yet it is precisely those Americans who’ve lost out in the Senate’s compromise version of the economic stimulus package, which was scheduled for a vote on Tuesday. For the sake of securing three Republican votes and a filibuster-proof majority, Senate Democrats agreed to jettison some of the most vital and most progressive elements of the Recovery and Reinvestment Act—and the lifeline it offered to millions of poor and unemployed Americans.

At the press conference, Obama took some oblique shots at Republican resistance to the plan. Yet the president appears resigned to the Senate compromise, saying over the weekend, “We can’t afford to make perfect the enemy of the absolutely necessary.” Only in the next few days, as the Senate, the House, and the administration hammer out final legislation, will we learn to what extent expediency and lingering fantasies of bipartisanship trump any vision of the federal government as a place that its most vulnerable citizens can once again turn to for help in times of crisis.

A bottom-line issue in this recession is whether the government will help provide the unemployed with the most basic necessities of life: food, shelter, and health care. The ranks of jobless Americans have swelled by more than 50 percent in the last year, to 11.6 million. The official rate of 7.6 percent accounts only for the recently unemployed. Using a broader measure that includes people who have stopped looking for work or can’t find full-time jobs, the number jumps to a sobering 13.9 percent. Job losses have plunged millions of families into economic insecurity–where they join the working poor and the elderly and disabled poor, whose incomes are already lower than the unemployment benefits of many middle-class people.

Obama’s original proposal dealt with many of these needs head-on, with a bigger food stamp program, housing voucher programs, direct government refinancing to prevent foreclosures, federal funding for COBRA and an expanded Medicaid program to keep the unemployed from slipping into the widening pool of the uninsured. Key to all this was increased funding to state governments, whose budgets are now on the verge of catastrophic collapse. More money to the states means social service programs can continue to function, even expand to meet the strains of the crisis.

Two weeks ago, I noted: “With this package, Obama begins the process of reversing cutbacks initiated by Reagan and carried forward by the two Bushes, with some help from Clinton’s welfare ‘reform.’” On January 28, the House passed the legislation with its most important components intact. But the Senate version of the stimulus plan reduces monies for the states by a crushing $40 billion. Both plans extend unemployment benefits, but the expansion of Medicaid to the unemployed–which could have been a lifesaver for millions of families–is absent from the Senate bill. The subsidies for COBRA have been cut back, as have the increases in food stamps, and funds for school construction, early education, and environmental cleanup. And according to the Center for American Progress, the compromise would create between 430,000 and 538,000 fewer jobs than the House-passed bill.

The Senate bill preserves and elevates the revered conservative approach to economic stimulus: tax cuts and more tax cuts. Of course, they aren’t much use to the destitute. Obama had already offered up an excess of tax cuts in pursuit of that elusive bipartisanship, but the Senate added more cuts (including the AMT “patch,” a homebuyer’s credit, and business write-offs) destined to benefit only those with higher incomes.

In addition to leaving many needy Americans to fend for themselves, the Senate package is considerably less likely to be effective. Washington has long known that the swiftest way out of economic stagnation is to put money immediately into the hands of people who will spend it on goods and services. Tax cuts, by comparison, are slow to take effect, if they work at all.

If Obama supports this compromised Senate version of the Recovery and Reinvestment Act, rather than rallying his progressive base and exposing the Republicans as obstructionists (as David Corn has argued here), he will lose moral and political authority. He could also begin to look not only like a cautious centrist Democrat, but like another triangulator.