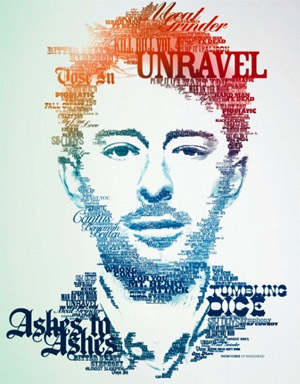 While it’s understandable if you’re a cynic about the usually-preposterous Grammy Awards, Sunday night’s show actually promises some nail-biting races and some dramatic, “will-they-or-won’t-they” performances. First of all, singer M.I.A., up for Record of the Year for “Paper Planes,” is scheduled to perform, despite the fact that she is very, very preggers. In fact, tomorrow Sunday is apparently her due date, if you can believe it. Will her wee Arulpragasam pop out right at the “ka-ching” noise in “Planes,” or will an early arrival force her to cancel? Also upping the drama quotient is Radiohead, who are not scheduled to perform (and have never performed at the Grammys), but rumors are flying all the way to Pitchfork, who seem to believe the Brit combo will play In Rainbows‘ jazzy, drum-led 5/4 opener “15 Step” accompanied by the USC marching band. Hooray Radiohead, but ugh, marching bands—they’re so, you know, “Hollaback Girl.” Pitchfork also holds out hope for a Kanye/Radiohead mashup performance, which would make me pleased for Earworm but sad for myself, since it’s long been a secret wish to see, for instance, Liam Gallagher wander out on to the Grammys stage for a surprise duet with Green Day—even if I don’t get a shout-out.

MTV already made some predictions about who will win (Coldplay, yes; Lil Wayne, nope) but I suppose I can try my hand at calling what the wrinkled old geezers in the Recording Academy will vote for without ever having heard it. My predictions in a few categories after the jump.Record of the Year
Adele – “Chasing Pavements”
Coldplay – “Viva la Vida”
Leona Lewis – “Bleeding Love”
M.I.A. – “Paper Planes” (Should win, 50% chance will win)
Robert Plant & Alison Krauss – “Please Read the Letter” (50% chance will win)

Coldplay would have been a shoo-in for this one, but the Satriani thing (and general negative reviews) has almost assuredly affected Grammy voters’ opinions, legitimately or not. M.I.A.’s stock is rising fast (especially with Slumdog the seemingly unstoppable Oscar juggernaut), but I’m not sure she can pull it off, and it was for a stoner movie before that, which Academy voters probably haven’t forgotten. Adele and Lewis are too light (and cancel each other out), leaving Plant & Krauss as the type of thing Grammy loves to love: dull-as-toast, industry-veteran, medium-level commercial success. I’d say it’s a tossup.

Another tough category. Wayne has critical acclaim and massive sales, but swears a lot, and is also a rapper, although if he doesn’t win, the Academy faces (more) accusations of racism. Radiohead have critical acclaim and industry-changing accolades, but is their pay-what-you-want screw-the-labels approach something the Recording Academy wants to reward? And does all that mean Robert Plant & Alison Krauss will sneak up from behind as Wayne and Radiohead split the vote? I’ll give it to Radiohead, but just barely.