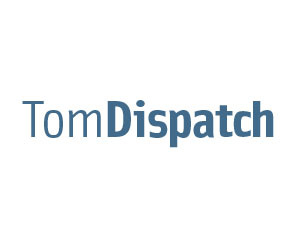 According to the New York Times, suicides in the U.S. Army this January alone could total as many as 24.
(For January 2008, the number was five.) If so, that would not only be the highest monthly total since the Army started keeping such figures
in 1980, but more deaths than occurred in Iraq and Afghanistan combined
that month. In 2008 as a whole, at least 128 soldiers killed
themselves. As the Times noted, “Suicides… rose for the fourth
year in a row, reaching the highest level in nearly three decades. Army
officials say the stress of long deployments to war zones plays a role
in the increase.”

Mark Benjamin and Michael de Yoanna, who have just completed a major multi-part examination
of Army suicides at Salon.com, record this official reaction to the
military health crisis: “‘Why do the numbers keep going up?’ Army
Secretary Pete Geren said at a Pentagon news conference Jan. 29. ‘We
can’t tell you.’ The Army announced a $50 million study to figure it
out.” The two reporters find a wealth of evidence of military
misdiagnosis, mistreatment, and plain, outright lack of desire to face
a plague of suicides. (“At Fort Carson,” the base they studied, “a
mental problem from combat is still a scarlet letter.”)

But above all, of course, there are simply those endlessly repeated
tours of duty in the Afghan and Iraq war zones. Suicides, in this
sense, can be thought of as the individual symptoms of a larger
military disease. In these last years, the U.S. military has been, like
the individuals who committed suicide, overstrained, overstressed, and
made to fight wars that consumed America’s treasure, while becoming
ever more unpopular at home. As retired Air Force Lieutenant Colonel
and TomDispatch regular William Astore points out below, despite all
the lovely “support our troops” sentiments in the U.S., the military
was essentially abandoned to its stresses abroad and so became, in
practical terms, ever more “foreign” to Americans.

While the Army struggles, not particularly effectively, to deal with
its suicide problem, political and military leaders struggle no less
unimpressively to deal with the larger problems of military stress.
Their unanimous solution to the global policy version of post-traumatic
stress disorder: Cut down on those tours of duty and repair the
military by significantly expanding U.S. forces. The obvious response,
the one that could bring the military back to a state of health, is of
course roundly ignored: Downsize the global mission. Bring American
troops home. Tom

Is the U.S. Military Now an Imperial Police Force?
By William Astore

A leaner, meaner, higher tech force—that was what George W. Bush and
his Secretary of Defense Donald Rumsfeld promised to transform the
American military into. Instead, they came close to turning it into a
foreign legion. Foreign as in being constantly deployed overseas on
imperial errands; foreign as in being ever more reliant on private
military contractors; foreign as in being increasingly segregated from
the elites that profit most from its actions, yet serve the least in
its ranks.

Now would be a good time for President Barack Obama and Secretary of
Defense Robert Gates to begin to reclaim that military for its proper
purpose: to support and defend the Constitution of the United States
against all enemies, foreign and domestic. Now would be a good time to
ask exactly why, and for whom, our troops are currently fighting and
dying in the urban jungles of Iraq and the hostile hills of
Afghanistan.

A few fortnights and forever ago, in the Bush years, our
“expeditionary” military came remarkably close to resembling an updated
version of the French Foreign Legion in the ways it was conceived and
used by those in power—and even, to some extent, in its makeup.

For the metropolitan French elite of an earlier era, the Foreign Legion
— best known to Americans from countless old action films—was an
assemblage of military adventurers and rootless romantics, volunteers
willing to man an army fighting colonial wars in far-flung places.
Those wars served the narrow interests of people who weren’t
particularly concerned about the fate of the legion itself.

It’s easy enough to imagine one of them saying, à la Rumsfeld,
“You go to war with the legion you have, not the legion you might want
or wish to have.” Such a blithe statement would have been
uncontroversial back then, since the French Foreign Legion was—well
— so foreign. Its members, recruited worldwide, but especially
from French colonial possessions, were considered expendable, a fate
captured in its grim, sardonic motto: “You joined the Legion to die.
The Legion will send you where you can die!”

Looking back on the last eight years, what’s remarkable is the
degree to which Rumsfeld and others in the Bush administration treated
the U.S. military in a similarly dismissive manner. Bullying his
generals and ignoring their concerns, the Secretary of Defense even
dismissed the vulnerability of the troops in Iraq, who, in the early
years, motored about in inadequately armored Humvees and other
thin-skinned vehicles.

Last year, Vice President Dick Cheney offered another
Legionnaire-worthy version of such dismissiveness. Informed that most
Americans no longer supported the war in Iraq, he infamously and
succinctly countered,
“So?”—as if the U.S. military weren’t the American people’s
instrument, but his own private army, fed and supplied by private
contractor KBR, the former Halliburton subsidiary whose former CEO was
the very same Dick Cheney.

Fond of posing in flight suits, leather jackets, and related
pseudo-military gear, President Bush might, on the other hand, have
seemed overly invested in the military. Certainly, his tough war talk
resonated within conservative circles, and he visibly relished speaking
before masses of hooah-ing soldiers. Too often, however, Bush simply used them as patriotic props, while his administration did its best to hide their deaths from public view.

In that way, he and his top officials made our troops into foreigners,
in part by making their ultimate sacrifice, their deaths, as foreign to
us as was humanly possible. Put another way, his administration made
the very idea of national “sacrifice”—by anyone but our troops —
foreign to most Americans. In response to the 9/11 attacks, Americans
were, as the President famously suggested only 16 days after the
attacks, to show their grit by visiting Disney World and shopping till
they dropped. Military service instills (and thrives on) an ethic of
sacrifice that was, for more than seven years, consciously disavowed
domestically.

As the Obama administration begins to deploy U.S. troops back to the
Iraq or Afghan war zones for their fourth or fifth tours of duty, I
remain amazed at the silent complicity of my country. Why have we been
so quiet? Is it because the Bush administration was, in fact,
successful in sending our military down the path to foreign
legion-hood? Is the fate of our troops no longer of much importance to
most Americans?

Even the military’s recruitment and demographics are increasingly alien
to much of the country. Troops are now regularly recruited in “foreign”
places like South Central Los Angeles and Appalachia that more affluent
Americans wouldn’t be caught dead visiting. In some cases, those new
recruits are quite literally “foreign”—non-U.S. citizens
allowed to seek a fast-track to citizenship by volunteering for
frontline, war-zone duty in the U.S. Army or Marines. And when, in
these last years, the military has fallen short of its recruitment
goals—less likely today thanks to the ongoing economic meltdown—mercenaries have simply been hired at inflated prices from civilian contractors with names like Triple Canopy or Blackwater redolent of foreign adventures.

With respect to demographics, it’ll take more than the sons of Joe
Biden and Sarah Palin to redress inequities in burden-sharing. With
startlingly few exceptions, America’s sons and daughters dodging
bullets remain the progeny of rural America, of immigrant America, of
the working and lower middle classes. As long as our so-called best and
brightest continue to be AWOL when it comes to serving among the
rank-and-file, count on our foreign adventurism to continue to surge.

Diversity is now our societal byword. But how about more class
diversity in our military? How about a combat regiment of rich young
volunteers from uptown Manhattan? (After all, some of their
great-grandfathers probably fought with New York’s famed “Silk
Stocking” regiment in World War I.) How about more Ivy League recruits
like George H.W. Bush and John F. Kennedy, who respectively piloted a
dive bomber and a PT boat in World War II? Heck, why not a few
prominent Hollywood actors like Jimmy Stewart, who piloted heavy
bombers in the flak-filled skies of Europe in that same war?

Instead of collective patriotic sacrifice, however, it’s clear that the military will now be running the equivalent of a poverty and recession “draft”
to fill the “all-volunteer” military. Those without jobs or down on
their luck in terrible times will have the singular honor of fighting
our future wars. Who would deny that drawing such recruits from
dead-end situations in the hinterlands or central cities is strikingly
Foreign Legion-esque?

Caught in the shock and awe of 9/11, we allowed our military to be
transformed into a neocon imperial police force. Now, approaching our
eighth year in Afghanistan and sixth year in Iraq, what exactly is
that force defending? Before President Obama acts to double the number
of American boots-on-the-ground in Afghanistan—before even more of
our troops are sucked deeper into yet another quagmire—shouldn’t we
ask this question with renewed urgency? Shouldn’t we wonder just why,
despite all the reverent words about “our troops,” we really seem to
care so little about sending them back into the wilderness again and
again?

Where indeed is the outcry?

The French Foreign Legionnaires knew better than to expect such an
outcry: The elites for whom they fought didn’t give a damn about what
happened to them. Our military may not yet be a foreign legion—but
don’t fool yourself, it’s getting there.

William J. Astore, a retired lieutenant colonel (USAF), taught for
six years at the Air Force Academy. He currently teaches at the
Pennsylvania College of Technology. A TomDispatch regular, he is the
author of Hindenburg: Icon of German Militarism (Potomac Press, 2005), among other works. He may be reached at wastore@pct.edu.