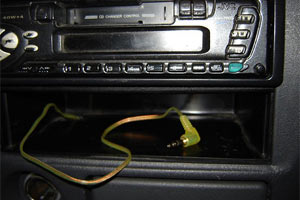 Photo used under a Creative Commons license from Flickr user <a href="http://www.flickr.com/photos/aelse/">notelse</a>.

Here’s an interesting trend noticed by NPR’s Morning Edition: the theft of car stereos, once a ubiquitous urban crime, may be going the way of train robberies:

It’s a crime that plagued car owners throughout the 1990s. But according to the FBI’s latest crime report, car stereo thefts have fallen by more than half over the past 15 years, from more than a million in 1994 to just over 400,000, even as car theft rates have remained high. Washington, D.C., police officer Mark Lakomec has seen a dramatic difference on the street. For 10 years, his job has been to spot stolen cars, which he does two to three times a night. In the 1990s, he said, every stolen car was missing the stereo. These days, he says thieves will take just about anything — umbrellas, sunglasses, even motor oil — but they leave the radio

NPR gives a variety of reasons for the change, primarily the fact that most cars now come with tolerable stereos, custom-fitted to the dashboard, thus discouraging theft. Moreover, these days cars don’t have stereos, they have Entertainment Systems, with DVD players and flip-down screens and Bluetooth interfaces and soothing interactive voice commands, and how do you steal the Hal 9000 from a Prius? The article mentions a piece of equipment also destined to go the way of the dodo bird, the trunk CD changer. Remember those things? It was like carrying a little jukebox in your trunk, and it seems like just three years ago that cool people had them. Nowadays, even my dad’s pickup has an 1/8 inch plug for my iPod so I can play him the new Coldplay song.

I will say I’m kind of sentimental about aftermarket stereos. When I was in high school, I drove an olive-green 1972 Ford Galaxy that my parents bought me for $250. I wired it up with scavenged speakers and cheap Wal-Mart equipment until I had the bangin-est system for blasting Violent Femmes cassettes in central Nebraska. Well, probably not even, but it was fun. I will say that I don’t miss the eternal curse of those days: if you weren’t careful about putting away your mixtapes, they’d melt in the sun, and then all your hard work, arranging New Order’s “Dreams Never End” right after The Cure’s “Inbetween Days,” and then decorating the case with a little collage of funny magazine pictures, would be lost. Mp3s may not give you the opportunity for collage-art cases, but I’m so glad they’re here.