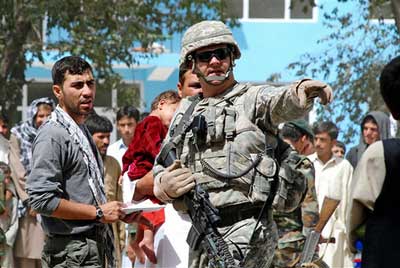 The more than 2,000 Arab Americans currently working for the US military as contract linguists in Iraq are marked for death. Insurgents view them as traitors and, since 2003, at least 300 have been killed on the job. On the streets of Iraq, many don masks to shield their faces from hostile eyes. Their work is difficult and exhausting, but pays well—more than $200,000 a year for the most skilled positions. Or at least it did. Now some of these translators, who have seen their pay abruptly slashed by as much as 40 percent, are at war with Global Linguist Solutions (GLS), the government contractor that manages a $4.6 billion contract to provide interpreters for the US Army on behalf of an array of smaller subcontractors. The outcome of this fight could affect the US mission in Iraq.

Lawyers representing more than 100 current and former contract linguists in Iraq are preparing to file a class action suit against Falls Church, Virginia-based GLS, which is majority owned by DynCorp International. The linguists allege that the company illegally changed the terms of their employment agreements, using threats and intimidation to coerce them into signing modified contracts for far less money. GLS denies any wrongdoing, holding that the pay cuts were not only legal, but also a financial necessity given the firm’s narrowing profit margins. But Robert Burlison, the linguists’ lead attorney and organizer of the class action, says that greed lies at the root of the case. The company, he says, has undertaken “a concerted effort to make more money and to do it on the backs of the linguists.”

The dispute erupted on January 2 when GLS president and CEO James “Spider” Marks, a retired US Army general (and one of the former military officers outed by the New York Times in April 2008 for pushing Pentagon propaganda on cable television), sent an email to the linguists telling them they would be required to sign salary adjustment agreements; should they fail to comply, they would be sent home. For most of the Iraq War, in addition to their base salaries, linguists have been earning hazard compensation that amounts to 70 percent above their base pay. The rates are set not by GLS, but by the US government, based on the official assessment of risk to US personnel in the field. (GLS also employs a coterie of local Iraqi linguists, who do not qualify for danger pay and earn base salaries of only $1,200 to $1,400 a month.)

Underlying the impending class action is the question of whether GLS broke the law by unilaterally modifying the terms of its linguists’ employment agreements midcontract, before they came up for renegotiation. According to GLS spokesman Doug Ebner, the firm was merely reacting to changes in its own contract with the US Army, which had demanded more linguists for the same price, thereby lowering the firm’s margins. He declined to provide a copy of the contract or to discuss it in any detail, but according to Stars and Stripes, changes requested by the Army amounted to a “nine-figure reduction” to the GLS budget. The only way to make up the difference was to reduce salaries, says Ebner. “We supply people,” he explained. “We don’t have any overheard except operating costs and the costs of support and salaries. We don’t have other things to cut.” Perhaps not, but according to the linguists, GLS violated their employment agreements when it looked to make up the difference by reducing salaries. The linguists’ individual contracts with GLS “don’t say, ‘If the government pays us less, we can modify it consistent with that,'” says Burlison.

By January 17, a group of disgruntled translators had launched a website detailing their concerns about GLS’s actions and imploring their colleagues not to sign salary modifications. According to Mahmoud Elboraii, an Egyptian American interpreter who helped create the site, the goal was to convince at least 250 translators to refuse signing, which would have put GLS below 90 percent strength and caused it to default on its contract with the US Army. “Our goal was to stop the salary cut, to protest it, because there’s no place in America or in Iraq or in the rest of the world where, with your experience and years of working, they will pay you as a new recruit,” says Elboraii, who worked as a contract interpreter in Baghdad for more than five years.

Aggravating the situation, according to numerous written complaints and former GLS linguists interviewed for this story, was the firm’s alleged attempt to strong-arm personnel into modifying their contracts. Knowing that a revolt was brewing among its contractors, GLS “began sending mobile teams to get signatures for the modification of the contract, [and] that’s when they started intimidating and harassing linguists,” says Elboraii. The stories collected on the protest website are strikingly similar: allegations of GLS managers demanding signatures on the spot, often not allowing linguists to review the modifications in advance, and threatening them with termination should they refuse. In one case, when a team of linguists requested more time to consider their options before signing, a GLS manager allegedly said, “Your names will go on a shit list tonight if you do not sign…[and] once you’re on the list, it will be extremely difficult to pull you off.”

GLS managers also allegedly shamed interpreters for abandoning US troops, warned that there were plenty of other qualified candidates to replace them should they refuse to sign, and said those who didn’t would likely wind up on the unemployment line, competing with thousands of others thrown out of work by the recession. In a few cases, things seem to have turned even uglier. “They actually started humiliating linguists and calling them names,” says Elboraii. One linguist reported a conversation he had with a GLS manager in the chow hall of his base, where the manager allegedly shrugged off the linguists’ complaints, saying, “You know the Arabs…when they hear they’re going to be fired, they will all spread like cockroaches.” (Ebner said that any cases of alleged misconduct by GLS managers “would be fully investigated,” yet to date there is no evidence to suggest that anyone from GLS has been.)

In the end, GLS’s heavy-handed approach appears to have won out. Despite their complaints, most interpreters agreed to sign contract modifications rather than give up their jobs. The relative few who didn’t now look to the courts for restitution. As their class action suit takes shape, Elboraii and his fellow linguists look back on their time in Iraq with new perspective. “Were we fighting to convince a greedy corporation that if it was not for us, there would not be any contract to be awarded?” he writes in a post on the protest website. “Were we fighting to convince the whole world that we are not cockroaches as GLS described us? Is it worth it to run around like a fugitive after six years of serving with the US Army in Iraq?” The questions are rhetorical, but Elboraii has no illusions about where an individual contractor ranks in relation to the big money GLS and other private contractors have made working for the US government in Iraq. “We are nothing but numbers,” he says. “GLS doesn’t care who they have working in Iraq. The bottom line is they wanted to make more money.”