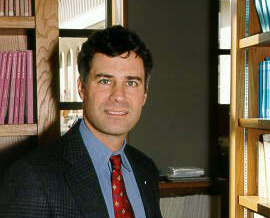 When President Obama first unveiled his economic team, it was dominated by centrists with strong ties to Wall Street and the bank-friendly policies of the past: Timothy Geithner, Larry Summers, Paul Volcker. Progressive policy-meisters in Washington and elsewhere complained and soon a progressive economist, Jared Bernstein, was added to the mix, but was placed on Vice President Joe Biden’s squad. This week, Obama added another economist of a left-of-center bent to the team—and placed him in a critical job.

Days ago, Alan Krueger, a longtime professor at Princeton University who served as the chief economist at the Department of Labor in the mid-’90s, was named the assistant secretary of the treasury for economic policy. His appointment came amid criticism that many key positions in Geithner’s overburdened Treasury Department remained unfilled, even as the economy continues to crash. But now, as the Treasury battles to save the economy, its top egghead will be an academic who has won cheers from liberal economists.

“To my mind, he would be one of the best people we could hope to get in this position,” says Dean Baker, head of the left-leaning Center for Economic Policy Research. Adds CEPR’s chief economist, John Schmitt: “He has done a lot of research that progressives would be very happy about. He is certainly one of the absolute top labor economists in the country.” One-time Clinton economic aide and Berkeley economist Brad DeLong calls Krueger a “good choice.”

Krueger is best known for his work on the minimum wage. In 1997, he cowrote a book with economist David Card called Myth and Measurement: The New Economics of the Minimum Wage. They argued that the moderate increases in the minimum wage typically seen in the US don’t raise unemployment numbers—a thesis that went against much of the conventional wisdom at the time—and that such pay boosts have a substantial impact on the take-home pay of low-wage workers. The book, says progressive economist James K. Galbraith, established the minimum wage’s value “very firmly and to the horror of the mainstream.” At first, Krueger’s ideas on the minimum wage were highly controversial. “He took a lot of heat for that, and stood up,” says Schmitt. Krueger’s extensive background on issues related to job creation and wage distribution, Schmitt adds, will serve him well as the Obama team attempts to implement the stimulus bill, which aims to create more than 3 million new jobs.

Unlike many members of Bush’s economic team, Krueger has never worked for the financial industry. And unlike some of his bosses on the Obama team, he had no role in crafting the Treasury Department’s signature and much-criticized bailout plan. Secretary Geithner, for example, was president of the Federal Reserve of New York for five years and helped determine the Bush administration’s response to failures at Bear Stearns, AIG, and Lehman Brothers. “Bringing in economists that don’t have ties to Wall Street—that is particularly helpful in the Treasury at this moment,” says Schmitt.

One left-leaning economist who knows Krueger’s work well does question whether Krueger will too easily bow to the more centrist instincts of his bosses. “He has a very strong sense of when it’s beneficial to speak up and when it’s beneficial to not speak up,” says this economist, who does not want to be publicly identified as criticizing Krueger. “He’s a just a hugely political guy. He has a breathtaking understanding of the way politics happen in DC.”

There is one aspect of Krueger’s economic philosophy that may irk progressives. “He has very strong views on trade that probably differ from the typical progressive perspective,” says the unnamed economist. Like many members of Obama’s economic team, Krueger has embraced free trade policies. This will likely place him in opposition to those parts of the Democratic Party base that decry NAFTA and urge fair trade policies. But so far it’s unclear what trade policies will be promoted by the Obama administration.

How deep and how far will Krueger’s influence run in Obamaland? His position has a flexible job description. DeLong, who was deputy assistant secretary of the treasury for economic policy from 1993 to 1995, describes Krueger’s responsibilities this way: “Whatever, and as much or as little, as the secretary wants.”