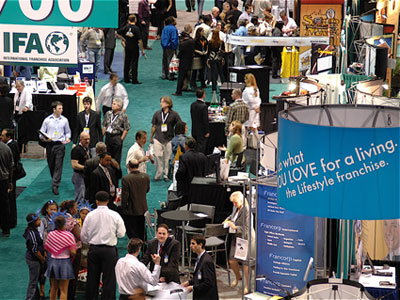 “Can you succeed in a recession?” screams the sign for the Fast-Fix jewelry franchise booth. The company says you can, if you can just come up with $152,000 to open up a Fast-Fix jewelry and watch-repair kiosk in your local mall. Touting “extremely high margins” and financial security in a tough economy, the franchise was one of many exhibitors at the recent International Franchise Expo in Washington, DC, promising recession-proof moneymaking schemes.

Given the dire straits many Americans now find themselves in, such prospects may look tempting, particularly to those who got a little cash when they were shown the door at their last corporate job. The Obama administration is even trying to make it easier for people to obtain financing should they decide that they were made to run a watch-repair kiosk. But according to folks selling everything from Bojangles to Sign-o-Rama outlets, even promises of recession-proof investments don’t seem to be luring many takers at the expo. As with the real estate business, the franchise industry is showing signs that much of its recent growth over the past decade may have been fueled largely by access to cheap credit and frequently gullible investors rather than, say, actual product sales.

George Lambro, one of the men staffing the Fast-Fix booth, assures me that an investment in a Fast-Fix outlet will deliver “80 percent profit margins” to a lucky investor. He claims that in the right mall, his stores generate $1,143 per square foot annually, which is more than three times what he says an average mall store generates. “Once you get the manager and jeweler in place, they run themselves,” he tells me. To attract potential franchise owners, Lambro relies on a smooth sales pitch, promises of a “proven concept,” and, best of all, free ultrasonic jewelry cleaning in the booth. It doesn’t have quite the draw of the nearby pile of chocolate-chip cookies offered by Mrs. Fields, but at least the jewelry cleaning takes long enough that he can make most of his spiel while people wait to get their diamonds back. (By contrast, the cookie-eaters blow by Mrs. Fields with hardly a glance at the brochures.)

Lambro’s come-ons, however, aren’t drawing as many takers this year as they have in the past. He thinks it might be those six figures at the starting gate. A year or two ago, most people who invested in Fast-Fix franchises did so by taking out home equity loans. Now that so many people owe more on their houses than they’re worth, he says the only people buying franchises these days are cashing out what’s left of their 401(k) plans. (Helpfully, the convention offers a free seminar on how to do this without tax penalties.)

Lambro does find one potential franchisee: Cynthia Bellian, who was recently laid off from the marketing department at Alcoa. She has traveled all the way from one of the nation’s foreclosure capitals, Cleveland, Ohio, to check out potential business opportunities. She has severance money coming to her and she and her husband are considering going into business for themselves. She has a friend who imports jewelry from Italy who might be a good partner for a Fast-Fix. “There’s always the risk of building something on your own,” she explains, after getting her ring cleaned at the Fast-Fix counter. “If somebody’s already got a turnkey system,” she says, already versed in franchise lingo, why not go that route? Besides, she tells me later, the competition for jobs in her area is stiff. Days after the franchise expo, she would go to a job-seekers group and discover 200 people there, making the franchise option look even more appealing. “Maybe now really is the time to be your own boss and start your own business. Maybe I could be the hiring company down the road,” she says.

“Turnkey systems”—i.e., franchises like SportClips, Fast-Fix, Quiznos, and the dozens of others on display at the Expo—are tiny engines of entrepreneurialism that the Obama administration is trying to jump-start with the help of people like Bellian. On March 16, the White House announced a plan to “unlock credit for small business” that includes boosting the federal government’s guarantee of loans backed by the Small Business Administration to 90 percent, up from 75. The new guarantee is an attempt to get banks lending money again to people who want to start a small business or open up a franchise. SBA-backed loans have all but frozen up during the recent credit crunch. The White House press release on the new program says the guarantees will “help provide lenders with the confidence that they need to extend credit, knowing they both have a backstop against their risk and a source of liquidity.”

In the case of franchises, however, that backstop is going to need some serious reinforcements. In February, the Wall Street Journal reported that franchisees were defaulting on existing loans in record numbers. Defaults jumped 52 percent in fiscal 2008 over the previous year, for nearly $100 million in losses. Moreover, many of the franchise brands topping the list of defaults are those that have been accused of defrauding franchisees, including the Curves fitness chain, Cold Stone Creamery, and Quiznos, which led the way with the most defaulted loans. This suggests that, as in the mortgage sector, the lending standards by SBA-backed bankers were anything but strict.

Part of the problem is that many franchises make most of their money by selling franchises, not subs, coffee, or other products. So they aren’t especially judicious in where they allow people to open stores or to whom they sell franchises. (One of the raps against Cold Stone Creamery is that the company was so interested in expansion that it authorized franchisees to open practically next door to each other, ensuring that the stores would cannibalize each other.) Companies often require franchisees to buy overpriced supplies only from approved buyers who kick back to the corporate parent for the sales, all of which can make it difficult for an individual franchisee to turn a profit even without any element of fraud. Franchise contracts are also usually laden with mandatory binding arbitration clauses that prevent investors from trying to recoup their money in civil suits when they’ve been screwed over. All of this may hinder the administration’s hopes of fueling the economy by encouraging the growth of franchises, despite the SBA’s presence at the expo.

Bellian, 45, says she realizes there are risks in investing in a franchise. But she believes she could avoid that problem with due diligence. She went to a session at the expo sponsored by the Federal Trade Commission on what to look for and how to vet a potential franchise. “The key message I got was research it, talk to other franchisees. Visit those locations and know what you’re walking into,” she says.

Still, as Dick Mueller, vice president of franchise sales at SportClips, concedes, not everyone makes it. While he says the company, which sells sports-themed men’s hair salons and is opening five new stores a week, has about a 1 percent store failure rate, that doesn’t mean 99 percent of the investors succeed. Rather, many of them will go broke starting up the store and spend years digging themselves out of bankruptcy and debt. If that happens, the company can still sell the store to a new owner. Either way, the corporate parent will make money. After all, he says, “Even in bad economic times, people still get their hair cut.”