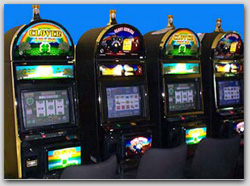 Photo courtesy of Star Casino Entertainment and the Comanche Nation

Californians can say goodbye to the electronic bingo machines (better known as e-bingo) in their charitable bingo halls thanks to a ban signed by Gov. Schwarzenegger that takes effect tomorrow. Turns out that bingo isn’t just good old-fashioned fun anymore. Instead, it’s at the center of a fight between nonprofits and Native American tribes who are all clamoring after bingo’s big money.

Federally recognized tribes will still get to operate the machines on their reservation land, but charities will have to shut theirs down. Despite a few upshots for charitable bingo operators in the new law, like an increase on prize caps from $250 to $500 for traditional bingo games, the e-bingo ban still puts them on the losing end because many have come to rely on the machines to keep their business afloat.

Doug Pringle, who operated 80-plus machines out of Sacramento’s North Watt hall for his nonprofit, Disabled Sports USA, worries that he won’t be able to fulfill the terms of his 5-year lease without e-bingo. “Even if we close this building, we’re obligated to about $850,000 in rent over the next 2 years,” he said. “How are we going to replace three-quarters of a million dollars?”

Yes, millions of dollars. That’s what’s at stake in California’s bingo industry. Halls in Sacramento County alone raised $55 million from July 2007 to July 2008. But not all of it is going to charity. Little more than 8 percent of what charitable halls rake in actually finds its way to sick children or soup kitchens.

Bingo operators owe their big bucks to a legal loophole that lets nonprofits offer the game as a fundraiser in 48 states. Bingo halls, which dot the strip malls of working class America everywhere, have a similar look: windows blackened, with the size, odor, and ambiance of a bowling alley. Nearly all bingo halls in the US still offer old-fashioned bingo games—the kind that requires paper cards and ink markers—but they’re grossly out of style. Today’s bingo is digital.

An e-bingo machine could easily be mistaken for a slot machine: both are fridge-sized and feature video simulations of spinning reels. But it’s higher on the evolutionary ladder than a typical slot machine because it allows players to compete against each other instead of against the machine.

That’s where the Native American tribes come in. E-bingo technology evolved out of their demand for a game that would bring in the revenue of slot machines, but fit into the technical category of bingo under the rules of the Indian Gaming Regulatory Act. The Act allows tribes to run all the bingo they want on their reservations without making compacts with state and local governments. (Whereas, to run Vegas-style casinos, they need to make an arrangement that involves dishing out a portion of the revenue to the state.) When Indian casinos saw that nonprofits were adopting e-bingo in their own charitable halls—which were in direct competition with nearby Indian casinos—many tribes didn’t only see it as a threat to their revenue; they saw it as a threat to their sovereignty.

So, for example, the United Auburn Tribe, which operates Thunder Valley Casino, threatened to withhold millions of dollars from the state if charitable bingo halls continued to run the machines in their halls. Apparently those were dollars that the Governator wasn’t willing to part with, especially during California’s budgetary crisis.

My suggestion is for Californians to get in all the e-bingo they can at their local charitable hall before those screens go dark. Because gambling for charity doesn’t really count as gambling … right?