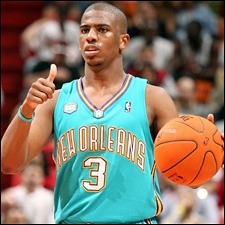 A remarkable thing has happened in New Orleans and for once an NBA star deserves more praise and worship then he’s getting. Let me set the scene: the state of Louisiana now subsidizes its NBA team, the New Orleans Hornets, to prevent them from leaving after Katrina decimated their already weak market. This agreement was reached last season, when it looked as if the Hornets were likely to lose $20 million and would need to search for a new city. Louisiana paid the team $6.5 million, no small amount considering the state budget deficit was $341 million. This year, officials estimated those payments to rise to $7 million, even as the budget deficit balloons to more than $2 billion.

Back to that remarkable thing: this season the Hornets lead the league with a 38.6% increase in attendance and are up to a respectable average of 16,976 fans per game. Against all odds the Hornets will surpass attendance and revenue benchmarks, triggering a clause in their deal with the state so that they no longer receive the state money. That extra $7 million is an unexpected boon and one of the only good pieces of news coming out of Louisiana, where Gov Bobby Jindal has talked about refusing stimulus money while pushing massive cuts for state programs. So why is no one talking about the wonderful Hornets player largely responsible for all of this? Why no buzz about the one-man recession fighting machine?

Doug Thornton of SMG, the company that manages the New Orleans Arena for the state, had this to say to the AP:

What it really means is the fans of New Orleans supported the team and it’s really a testament to the management of the organization that the team is doing such a great job this year.

Huh? Management of the organization? Not the same management that tried to trade one of their top three players in a bald cost-cutting move only to have the trade fall through when the player failed his physical. Not owner George Shinn, who holds a special spot in the pantheon of evil team owners. Not the same fans that didn’t support the team even before Katrina, didn’t start showing up until well after the team was good, and haven’t been able to support professional basketball dating back to the Jazz and the ABA’s Buccaneers.

Any and all credit needs to go to Hornets star Chris Paul. If you don’t know the name (and no, NO relation to Ron Paul), get to know it, because Chris Paul is the best point guard since Magic Johnson and, with all due respect to Zeke, the best little man of all time.  Great basketball players are celebrated for their ability to elevate the players around them, well, Paul is so good he elevates his teammates, elevates the coach, the owner, the fans, hell he’s trying to save the world. He has already been widely credited with saving the NBA in New Orleans, and for some time he has been the face of recovery in New Orleans. Now he’s taking on the state budget.

And this reverse bailout of sorts comes at a time when the NBA, and sports in general, are struggling like the rest of the economy. It didn’t look good for the Hornets last season and that was before the recession. NBA teams are dropping left and right. The league just took out a $200 million dollar loan to help 12 teams shore up “operating losses incurred because of the economy.” Suddenly the once proud franchises in Indianapolis and Sacramento are in jeopardy. And while the contractual nature of broadcast and sponsorship deals have helped to insulate the NBA as a whole, the league is still having all sorts of problems. Chief among them are the looming negotiations of a new Collective Bargaining Agreement. The last time a lockout happened it took the league a decade to recover. Who knows what lockout plus recession equals, maybe even Chris Paul won’t be enough.

Update (4/9/09): Hornets decide to take NBA bailout money after all.