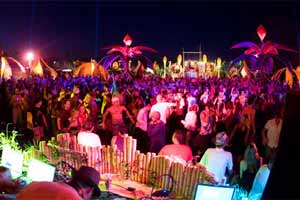 The tenth installment of America’s hottest music festival is only one week earlier than usual this year, but it sure feels like it snuck up on me. Holy palm trees, it’s this Friday, and I’m not ready! I need to get new crazy-colored board shorts, hipster vintage T-shirts, and decide on a poolside cocktail! More than anything, though, any festival attendee with a serious interest in music needs to start planning early, picking priorities from the cornucopia of quality acts. For the next three days I’ll take a look at the lineup, splitting things up into admittedly imperfect “rock,” “hip-hop” and “electronic” categories, for lack of a better idea. Today: rock.

As usual, I was a bit skeptical of the Scottish combo’s new album, but it’s really grown on me, especially the “My Love’s in Jeopardy” strut of “No You Girls.” Their live shows are always fun, and their Friday appearance will probably be a big crowd-pleaser for an audience who’s kind of forgotten how much they love “Matinee.”

Franz Ferdinand – “No You Girls”

The Smashing Pumpkins-y Los Angeles foursome has a brand new album out tomorrow that’s getting good reviews, and their concerts tend to erupt into My Bloody Valentine-style ecstatic feedback fests. Which I mean as a compliment.

Speaking of the fuzziest noisemakers around, they’re going to be there too, on Sunday night, which I suppose is appropriate, since an exhausted crowd can just lay back on the grass and let the wall of sound wash over them like a pink tsunami. I just hope I’m not too tired to enjoy it, and I’m also a little skeptical of seeing the band outdoors—the last time I saw them, in 1992, was at a small club in Minneapolis in the freezing cold, and the sound seemed to reverberate and crystallize around us. How will it feel as it spreads out amongst palm trees, I can’t even predict.

Another Scot combo, this band is down on the fourth line of the Saturday lineup, but I predict a capacity crowd, whichever stage they’re stuck on. While their distorted sound, again, owes much to the legendary Valentines, but the lyrics ring out over the top clear as day, in a way that’s destined to be dramatic under the desert sky.

Listed way down on Sunday’s schedule, the Los Angeles punk combo may be so early that most hungover attendees will miss them. But their metallic, adventurous take on hardcore is worth pulling yourself out of the pool for.

As much as I adore the 74-year-old singer/poet/monk, I’m a bit concerned that his music is best heard in a smoky cabaret, not a hot and noisy festival. But “Hallelujah” will get everybody singing along.

You know, as much of a Beatles fan as I admittedly am, I wasn’t really that excited for Sir Paul; plus I was kind of resentful of his presence, which in my opinion jacked up the cost of area rental houses. But then I read the ecstatic reviews of his appearance at David Lynch’s TM benefit last week. Apparently his backing band (sans Ringo) is spectacularly tight, as I guess they would be, and the experience is just as joyful and giddy as an actual Beatles show. Plus, I think the guy has some experience with large-ish crowds.

The Beatles – “I Saw Her Standing There”