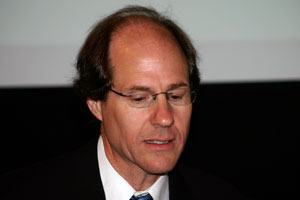 Editor’s Note: On Friday, John Paul Stevens, the oldest justice on the Supreme Court and the leader of its liberal wing, announced he would retire this summer. The news immediately fueled speculation that President Barack Obama might nominate his friend and former University of Chicago colleague Cass Sunstein to the vacant seat. Sunstein is currently serving as Obama’s regulatory czar. Eric Posner, a colleague, told Slate that Sunstein is “the most important legal scholar of his generation.” That’s the problem: as a uniquely prolific and creative legal scholar, Sunstein comes with a lot of baggage. In 2009, Jonathan Stein reported on a big business front group’s effort to paint Sunstein as a “radical animal-rights activist.” We’re republishing that piece today. If Sunstein was getting this kind of flak when he was a nominee for an obscure regulatory position, imagine the controversy if he was nominated to the nation’s highest court.

Does the famed legal mind President Obama has picked to be his regulatory czar really have a “radical animal-rights agenda”? And if so, is that the real reason an industry front group called the Center for Consumer Freedom (CCF) has launched a campaign against him?

Cass Sunstein, a renowned Harvard law professor who once taught with Obama at the University of Chicago, has been tapped to run the Office of Information and Regulatory Affairs (OIRA). The agency, little known to the public but highly influential in the executive branch, oversees all of the federal government’s current and newly created regulations. If confirmed as the head of the agency, Sunstein will supervise the implementation of much of Obama’s consumer safety, health, and environmental agenda. Because regulations in these fields are often opposed by big business, Sunstein will play a huge role in managing the Obama administration’s relationship with industry.

No wonder some within industry are raising a fuss about Sunstein’s regulatory beliefs. They have turned to a mega-lobbyist named Richard Berman, whose firm, Berman & Company, runs a variety of front groups for big business. In one famous episode from the mid-’90s, Berman established a group called the Guest Choice Network to fight the creation of nonsmoking sections in restaurants. The group was quietly funded by Philip Morris.

The Berman-run Center for Consumer Freedom claims its mission is “promoting personal responsibility and protecting consumer choice,” but its real purpose is to push back against activist groups and public interest nonprofits. A section of its website called “If Bacon Is Wrong, We Don’t Want To Be Lite” defends bacon, ice cream, and hot dogs, saying, “There’s no real scientific consensus on diet and cancer.” An op-ed written by Berman and posted on CCF’s site dismisses a study published in the Journal of the American Medical Association that links soft drinks to type 2 diabetes, calling it “the latest phony food scare.” CCF attributes the American obesity epidemic not to fast and junk food, but to “sitting disease.”

CCF’s latest target is Sunstein, who it claims has a “secret aim to push a radical animal-rights agenda in the White House.” The assertion appears similar to the usual alarmism that Berman peddles to further industry interests, but Sunstein has indeed made provocative statements on the issue of animal rights.

To support its charge that Sunstein is an extremist, CCF points to three pieces of evidence. In a 2002 working paper Sunstein authored at the University of Chicago, he wrote, “[T]here should be extensive regulation of the use of animals in entertainment, scientific experiments, and agriculture.” In a 2004 book that he coedited and contributed to, Animal Rights: Current Debates and New Directions, he wrote, “Animals should be permitted to bring suit, with human beings as their representatives…Any animals that are entitled to bring suit would be represented by (human) counsel, who would owe guardian-like obligations and make decisions, subject to those obligations, on their clients’ behalf.” And during a 2007 panel discussion at Harvard on animal rights, Sunstein said hunting for “sport and fun”—not for food—should be “against the law” and that greyhound racing, cosmetic testing on animals, and the eating of meat raised in inhumane conditions ought to be eliminated. He also said at the panel that the current treatment of livestock and other animals should be considered “a form of unconscionable barbarity not the same as, but in many ways morally akin to, slavery and mass extermination of human beings.”

Martha Nussbaum, a professor at the University of Chicago who coedited Animal Rights with Sunstein, insists that his views are “not in the least” radical. According to Nussbaum, Sunstein eats meat and has no secret plan to force vegetarianism on the American people. What he does support, she says, is “giving consumers more information about the conditions under which animals have been raised for food, and then letting them make a more informed choice.” Moreover, his view on experimentation on animals is not as draconian as CCF asserts. In the 2002 working paper, Sunstein wrote, “I believe that it is excessive to ban experiments that impose a degree of suffering on rats or mice if the consequence of those experiments is to produce significant medical advances for human beings.”

As for Sunstein’s argument that animals should have the right to sue humans, Nussbaum says it is simply a novel solution to a tough legal problem:

The problem here is that when existing laws against animal cruelty are not enforced, nobody has “standing” to get the authorities to enforce them. Concerned citizens are held to lack “standing” because they are not the ones who are suffering. So what Sunstein is asking is that humans be able to go to court as advocates for animals who are being ill treated, when that treatment violates existing law. So it is not a radical move; it is a move that solves a problem: We pass laws against animal cruelty, and then we have no mechanism to ensure that these laws will be enforced.

Saul Levmore, the dean of the University of Chicago Law School, echoes Nussbaum and insists that Sunstein will not foist his views on the country by influencing regulations as the head of OIRA. He acknowledges that Sunstein has been “provocative,” but he suggests that that was part of his job description as a legal scholar and public intellectual. Levmore adds, “It is just not the Cass Sunstein I know to impose his beliefs on others in a nondemocratic way. He has great respect for law and the democratic process.”

The CCF campaign at this point is a low-level one, consisting of a press release and a few pages on the organization’s website. But are the CCF and its backers worried most about Sunstein and animal rights, or do they fret that he will show less deference to industry than the George W. Bush administration? And will CCF step up its effort against Sunstein? The organization did not return a call requesting comment. (Meanwhile, Sunstein’s nomination has also drawn fire from the left, including by environmental and labor activists who question his “cost-benefit” approach to regulation and his position on the Occupational Safety and Health Administration, which he has suggested could be unconstitutional.)

Levmore says of Sunstein, “I don’t see him ever saying or meaning that he would or anyone should make or enforce regulations that do not have the backing of the legislature and the people.” Sunstein may initiate a new regulatory regime that protects consumers, the environment, and, yes, animals at the expense of CCF’s clients. But if he does so, it will likely be at the president’s direction, not his own.