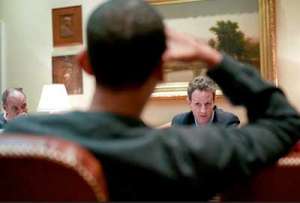 On Friday, the Treasury Department will share the preliminary results of its so-called “stress tests” with the nation’s troubled banks—but this week Timothy Geithner missed another opportunity to open up the books and tell the American public what’s really happening with the country’s financial system. When the treasury secretary addressed the five-member panel overseeing the Troubled Asset Relief Program on Tuesday, he stressed the administration’s commitment to “transparency, accountability, and oversight.” Then he proceeded to deliver a characteristically opaque assessment of the economic crisis, without providing much in the way of specific information. He didn’t provide much clarity regarding TARP expenditures, the amount of leverage remaining on the books of imperiled banks, or the volume of toxic assets hovering like storm clouds on the financial horizon. Never mind that some of this data was contained in the 250-page report produced by TARP Inspector General Neil Barofsky, which was released on April 21.

Barofsky reported that the TARP now spans 12 federal programs, totaling almost $3 trillion, or “roughly the equivalent of last year’s entire Federal budget.” That figure doesn’t count the nearly $10 trillion that the Federal Reserve, the Federal Deposit Insurance Corporation (FDIC), and the Treasury have put up via various loans, guarantees, and other backing. Of the $700 billion bailout component approved by Congress (the rest of the $3 trillion is parceled out through an acronym soup of other programs), $590.4 billion has been committed, of which $328.6 billion has already been spent.

In his testimony, Geithner highlighted the importance of getting the securitization markets moving again. And he blamed ongoing uncertainty over the value of “legacy” (a kinder word for “toxic”) assets for the lack of confidence in the banks, and their well-publicized lending shyness. He failed to mention the fact that many banks continue to hoard capital to cover the losses they’re not exposing.

Elizabeth Warren, chair of the Congressional Oversight Panel (or COP) has consistently called for greater transparency and evaluation methods for TARP money, and a more critical view of the securitization process that introduced so much risk and leverage into the financial system. Her concerns go to the heart of the question of whether it’s wise to prop up a system that wasn’t working by rewarding companies with cheap capital and the incentive to maintain the status quo, rather than restructuring the system outright. Geithner should listen to her.

In his remarks, Geithner noted that “foreclosures are particularly problematic” for people and banks. However, the federal government has committed just $75 billion to help struggling home owners, while the Public Private Investment Program (PPIP) Geithner unveiled in late March frees up as much as $1 trillion for private investors to cleanse bank balance sheets of toxic assets.

Meanwhile, Barofsky warns that taxpayers are at considerable risk, both from fraud and the “sheer size” of the PPIP. Already, his office has nearly 20 fraud investigations under way and is conducting an audit of the $45 billion that Bank of America received through the TARP program.

While Barofsky stayed on point during Tuesday’s hearing, Geithner dodged questions ranging from “How is the $700 billion dollar bailout working?” to “What’s the AIG exit strategy?” to “How is Citigroup doing?” (He said he couldn’t talk about “specific institutions.”)

Geithner did tell the panel that “currently, the vast majority of banks have more capital than they need to be considered well capitalized by their regulators.” Back in the real world, however, the International Monetary Fund had just raised its estimate of global bank losses to $4 trillion. And the FDIC had requested two credit line increases from the Treasury to cover expected US bank failures. (So far it has had to step in to assist or seize 55 banks since 2008—25 so far in 2009.)

Plus, bank lending is dropping. According to the Wall Street Journal’s analysis of the latest Treasury report, lending by TARP recipients is down 23 percent since they first got capital injections in October. One of the banks posting the greatest lending decline is JPMorgan Chase, which apparently used government guarantees and backing for acquisitions (Bear Stearns in March 2008 and Washington Mutual in September 2008) instead of lending.

Meanwhile, we await results of the infamous stress tests of the biggest 19 banks, which are supposed to made public on May 4. Geithner promised that, if needed, he will provide these banks with more capital in the form of preferred stock purchases. This is another win-win for the industry and another potential boondoggle for American taxpayers. If a bank’s stress tests are poor, it gains more access to federal money. If results are good, it’s gotten a public-sponsored adrenaline shot of capital that could have otherwise been used to shore up mortgages for individual borrowers, repairing the loans underlying the toxic mortgage-backed securities.

Geithner has said that stabilizing the financial system requires the government “to take risks.” That’s a scary notion given that overzealous risk taking is what got us into this mess. When it comes to digging us out of this financial fiasco, adding more risk to the equation doesn’t seem like a strategy that will bode well for the future. Equally troubling is Geithner’s tendency to skirt even the most straightforward questions about Treasury’s economic recovery efforts.