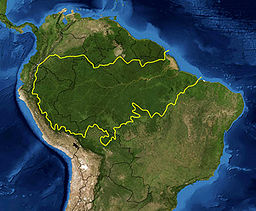 The weather in the Amazon is going crazy—and the sudden climate changes could affect not only Brazil and its neighboring countries, but areas as far from the rainforest as the Mexican gulf and maybe even the southern US. That’s what Paulo Moutinho, research coordinator for the Amazon Environmental Research Institute (IPAM), warns might happen if the world doesn’t cut its carbon emissions significantly over the next two years.

After two severe drought periods in 1998 and 2005, the Amazon is now in the midst of heavy flooding—the river has reached a record water level of 28 feet. The drought hurt the economy and caused healthcare costs to skyrocket, but Moutinho believes an overflow could cause equal damage by ruining plantations and causing outbreaks of sewage-related diseases.

And the Amazon is not the only region in Brazil suffering. After a hurricane in 2004—the first ever in the South Atlantic—and floods that killed more than a hundred people last year, the southern state of Santa Catarina is now going through a drought that has put hundreds of cities into state of emergency. Meanwhile, in the northern and northeastern areas of the country, floods have been leaving people homeless.

These problems could extend far beyond Brazil, since the rainforest plays a central role in rain distribution throughout Latin America. Moutinho believes that if the Brazilian trend of turning rainforest into pastures goes on unchecked, most countries in the Americas can prepare for a drastic change in rainfall.

Fuel burning is the main source of greenhouse gases in most major developing countries. But in Brazil, deforestation accounts for roughly three quarters of overall carbon emissions. “Reducing the deforestation in Brazil can be an example to other tropical areas and would give Brazil a leadership role in emission reduction,” says Moutinho. Guarany Osorio, coordinator of the Climate Campaign of the Brazilian arm of Greenpeace, notes that 20 percent of world emissions come from deforestation and fires. “That’s quite significant on a global level,” he says. Osorio hopes that a December conference in Copenhagen will bring funding to the United Nations Collaborative Program on Reducing Emissions from Deforestation and Forest Degradation in Developing Countries (UN-REDD Program).

Only the next few years will tell whether weird weather in Brazil is really related to global warming. But Osorio believes it almost certainly is. “Droughts and floods have always existed,” he says. “But global warming makes them more extreme and more frequent.”

Guest contributor Gabriela Lessa is a journalist and blogger spending the summer in her native Brazil. Watch for her regular environmental dispatches over the next few months on The Blue Marble.