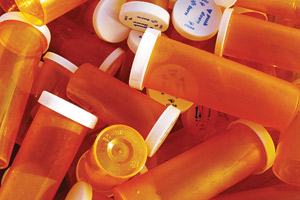 Photo from flickr user <a href="http://www.flickr.com/photos/macwagen/2531170178/" target="blank">macwagen</a> used under a Creative Commons license.

In a much-anticipated statement today, Barack Obama announced what is largely a public relations end-run by the health care industry, designed to trim a few scraps off of the nation’s porcine health care budget, while preserving its basic system of medicine for profit.

In a letter to Obama that was released over the weekend, executives from the Advanced Medical Technology Association (the medical device manufacturers lobbying group), the American Hospital Association, the American Medical Association, America’s Health Insurance Plans, and the Pharmaceutical Research and Manufacturers of America, as well as the Service Employees International Union, pledged to “do our part” to reduce health care costs. Their vague, pie-in-the sky promise amounts to just a 1.5 percent reduction in the growth rate of health care spending. Such is the explosion in health care costs that even this miniscule reduction represents a potential $2 trillion saving over 10 years. But there’s no guarantee this figure will be achieved. As the Washington Post points out:

The groups did not spell out yesterday how they plan to reach such a target, and…they offer only a broad pledge, not an outright commitment….In addition, White House officials said, there is no mechanism to ensure that the groups live up to their offer, only the implicit threat of public embarrassment.

“Public embarrassment”? From Big Pharma and the health insurance companies–-two of the most shameless industries in the history of corporate capitalism? In any case, even if the $2 trillion reduction is achieved, it clearly won’t come out of industry profits. The Post reports:

Signers of the letter said that large amounts could be saved by aggressive efforts to prevent obesity, coordinate care, manage chronic illnesses and curtail unnecessary tests and procedures; by standardizing insurance claim forms; and by increasing the use of information technology, like electronic medical records.

So let’s get this straight: Saving all this money depends on getting Americans to eat less? Good luck with that one. And the other brilliant cost-saving measures involve getting doctors to create computer records of all the overpriced drugs they prescribe, and giving patients easier forms to fill out before they get turned down six times by their private insurance companies?

Do you see a pattern here? None of these changes would make a dent in the industry’s bottom line–and what’s more, they could even enhance profits, by encouraging government-funded programs to help private companies streamline their bloated bureaucracy (much of which would instantly become superfluous under a public, single-payer system). The letter to Obama suggested this when it said: “We are committed to taking action in private-public partnership to create a more stable and sustainable health care system.” We all know by now that “private-public partnership” usually means public investment for private profit.

It all adds up to a brilliant move, when you think about it. It makes the private health care companies look cooperative and proactive, rather than like the greedy obstructionists they really are. It gets these companies on the inside track with the administration, and creates common cause with the unions. In particular, it establishes a solid place at the table for the health insurance industry, the blood-sucking middlemen who ought to be kicked out of the health care system altogether.

And what might the industry get in return for this generous “cooperation”? The Kaiser Daily Health Policy report today rounded up the possibilities:

The [Wall Street] Journal reports that although the groups did not ask for anything in return for the pledge, many of the factions are looking to prevent regulations that could “pose new burdens” or affect their profitability. For example, the health insurance industry is seeking to offset any reductions to their payments by obtaining new rules that would require all U.S. residents to have health coverage, according to the Journal. The Journal reports that health insurers have made several concessions intended to prevent a public option — which they fear could affect their profitability — as part of reform legislation (Wall Street Journal, 5/11). According to the AP/Philadelphia Inquirer, drugmakers are hoping to avoid a requirement that new drugs pass a cost-benefit test before receiving regulatory approval. In addition, hospitals and physicians are looking to avoid a system in which the government would dictate their payments for all patients, not just those under Medicare or Medicaid (Alonso-Zaldivar, AP/Philadelphia Inquirer, 5/11).

In other words, the underlying purpose of this PR stunt is to slow or block any meaningful health care reforms, which could actually improve care while reducing the price tag by a lot more than 1.5 percent. These include regulating the cost of pharmaceuticals and medical devices, curtailing or eliminating the role of the insurance companies, or introducing single-payer, which allows other developed countries to deliver superior health care for 20 to 40 percent less–all of which make $2 trillion in weight-loss programs and paperwork reduction measures look pretty pitiful by comparison.

All we can hope for is the possibility, remote as it may be, that Obama himself is also playing a PR game–making nice with the industry shills while planning some kind of genuine reform that will hit them in the only place that counts, and the only place where truly meaningful savings reside: their profit margins.