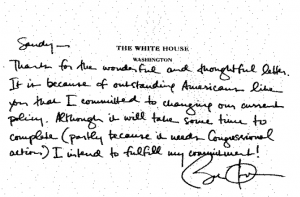 In January, Sandy Tsao, an army officer based in St. Louis, came out to her bosses as gay. She lost her job, of course—she’s being discharged on May 19. But she’s trying to take the discriminatory Don’t Ask, Don’t Tell policy down with her. Back in January, Tsao wrote a letter to President Barack Obama, asking him to repeal Don’t Ask, Don’t Tell. On Tuesday, she received a personal, hand-written reply to her letter. “Although it will take some time to complete (partly because it needs Congressional action), I intend to fulfill my commitment!” Obama wrote. He was talking about his commitment to repeal Don’t Ask, Don’t Tell. But gay soldiers like Dan Choi and Sandy Tsao are probably wondering how long “some time” will be. Choi, a West Point Graduate and Arabic linguist, received notice on Thursday that the Army National Guard is also about to fire him for being gay. He will be the first Arabic linguist fired during the Obama administration due to the DADT policy.

Thanks to the Clinton Administration, DADT is a federal law, so Obama is right that it should, theoretically, take congressional action to repeal it. But military law experts aren’t so sure. The Palm Center, a research institute at the University of California, Santa Barbara, announced on Thursday that it is “about to release a study, co-authored by experts in military law, that argues that President Obama has stroke-of-the-pen authority to suspend the gay discharge process via executive order.” Dr. Aaron Belkin, the center’s director, wrote about the potential executive order in the Huffington Post on Thursday. He says it’s very simple:

An executive order would not get rid of the “don’t ask, don’t tell” law, but would take the critical step of suspending its implementation, hence rendering it effectively dead. Once people see gays and lesbians serving openly, legally and without problems, it will be much easier to get rid of the law at a later time.

Three-quarters of the public and a majority of Republicans support letting gays serve openly in the military. Sure, Congress will probably eventually repeal the law. But for soldiers like Dan Choi, “eventually” will be too late to save their jobs. If Dr. Belkin is right, Obama is going to need a better explanation in his next letter to Sandy Tsao.