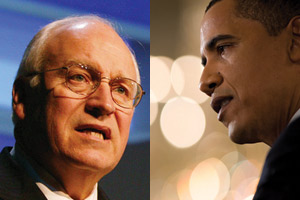 It was close as it gets to a grand Lincoln-Douglas-style debate. On Thursday, President Barack Obama spoke at the National Archives, where America’s values are enshrined on the nation’s age-stained founding documents; a mile or so away, former Vice President Dick Cheney addressed the American Enterprise Institute, where neocons spent years pushing for the war in Iraq. Both men addressed fundamental issues of national security and civil liberties, taking on such controversial matters as torture (or enhanced interrogation techniques), Guantanamo, and warrantless wiretapping. Guess who was Lincoln?

Obama went first (in part because Cheney delayed the start of his speech), presenting a vigorous defense of several recent decisions. He made the now-familiar arguments against “so-called enhanced interrogation techniques.” He contended that Gitmo has “weakened national security” by alienating allies and providing a rallying cry for enemies: “The existence of Guantanamo likely created more terrorists around the world than it ever detained.” He slammed the fear-mongers who have decried the possible transfer of some Gitmo detainees to facilities in the United States, calling on a GOP senator for assistance:

Nobody has ever escaped from one of our federal “supermax” prisons, which hold hundreds of convicted terrorists. As Senator Lindsey Graham said: “The idea that we cannot find a place to securely house 250-plus detainees within the United States is not rational.”

Obama also explained his policy moves that have been criticized by human rights and civil liberties activists: proceeding with reformed military commissions for the trials of some suspected terrorists; opposing the release of photos showing the abusive treatment of detainees; and continuing to use the state secrets privilege to prevent certain lawsuits (while reviewing this privilege). He noted that he opposed creating some type of truth commission, saying, “I believe that our existing democratic institutions are strong enough to deliver accountability.” He cited Congress in this regard and added, “The Department of Justice and our courts can work through and punish any violations of law.” In other words, don’t look to him to push for prosecutions or investigations. “I have no interest,” Obama explained, “in spending our time re-litigating the policies of the last eight years.”

The president criticized the Bush administration for having “made a series of hasty decisions” in the wake of 9/11. But he was a tad gracious: “I believe that those decisions were motivated by a sincere desire to protect the American people.” Yet he didn’t back away from his overall criticism of the Bush-Cheney years:

I also believe that—too often—our government made decisions based upon fear rather than foresight, and all too often trimmed facts and evidence to fit ideological predispositions. Instead of strategically applying our power and our principles, we too often set those principles aside as luxuries that we could no longer afford. And in this season of fear, too many of us—Democrats and Republicans; politicians, journalists and citizens-fell silent.

Ultimately, Obama endeavored to position himself in the high and middle ground:

The recent debate has been obscured by two opposite and absolutist ends. On one side of the spectrum, there are those who make little allowance for the unique challenges posed by terrorism, and who would almost never put national security over transparency. On the other end of the spectrum, there are those who embrace a view that can be summarized in two words: “anything goes.” Their arguments suggest that the ends of fighting terrorism can be used to justify any means, and that the President should have blanket authority to do whatever he wants—provided that it is a President with whom they agree. Both sides may be sincere in their views, but neither side is right. The American people are not absolutist, and they don’t elect us to impose a rigid ideology on our problems. They know that we need not sacrifice our security for our values, nor sacrifice our values for our security, so long as we approach difficult questions with honesty, and care, and a dose of common sense.

It was classic Obama, sounding reasonable, rising above the contentiousness.

Over at AEI’s 12th floor conference room, the crowd watched him on a big screen, and audience members muttered scornfully as Obama spoke. The president said he goes to bed and wakes up thinking about keeping the American people safe, and several people around me groaned or said, “Yeah, right.” When Obama explained his decision to ban waterboarding and the like, the audience at the National Archives applauded. In the AEI conference room, people shook their heads. When Obama maintained that using torture undermines the rule of law, a person near me exclaimed, “He really believes this stuff.” Obama said, “We have made our share of mistakes,” and AEIers grumbled.

Moments after Obama finished, Cheney hit the podium. And as he spoke, it became clear that he and his fans do believe in absolutism—enthusiastically and righteously (or self-righteously, as the case may be).

“In the fight against terrorism,” he declared, “there is no middle ground.” You’re either all in—or vulnerable to annihilation. “There is never a good time to compromise when the lives and safety of the American people are in the balance,” he said. Cheney tried to have it both ways. He claimed the interrogation tactics he supported were not torture but that it’s essentially okay to do whatever it takes to squeeze information out of terrorists. (He didn’t call detainees “terrorist suspects”; he referred to them, as he always does, as “terrorists.”)

But Cheney wasn’t content to draw the difference as one between those with will and those who are wimps. In trying to define the debate to his favor, the former veep set up a false dichotomy:

Here is the great dividing line in our current debate over national security. You can look at the facts and conclude that the comprehensive strategy [of the Bush-Cheney administration] has worked, and therefore needs to be continued as vigilantly as ever. Or you can look at the same set of facts and conclude that 9/11 was a one-off event—coordinated, devastating, but also unique and not sufficient to justify a wartime effort.

So it’s war or not. Cheney was ignoring Obama’s actual position: that this is a war—”Now let me be clear: we are indeed at war with al Qaeda and its affiliates”—but that the United States still must follow some rules to stay true to its values and core principles. The true difference in this debate is whether you see the need for balance or adhere to an absolutism that approaches an ends-justifying-the-means stance. Cheney was not honest enough to acknowledge this. He argued that either you take 9/11 seriously or you do not. He wants black and white.

His speech was full of the expected tough rhetoric. He accused Obama of having mischaracterized the national security decisions of the Bush-Cheney administration. He blasted the New York Times for disclosing the warrantless wrietap program: “It impressed the Pulitzer committee, but it damn sure didn’t serve the interests of our country, or the safety of our people.” Contradictorily, he slammed Obama for releasing the torture memos while also criticizing him for not intervening and declassifying two documents that Cheney insists shows that waterboarding and other harsh techniques yielded important evidence. (Cheney has a point: Obama should declassify those records—plus a host of other material on this matter.) The former vice president mocked those calling for a truth commission and derided the prospect of prosecuting former Bush-Cheney administration officials. And he repeatedly defended the use of what he wouldn’t call torture, dismissing public concern: “All the zeal that has been directed at interrogations is utterly misplaced.” He denounced the “feigned outrage” over the use of torture that is “based on a false narrative,” adding, “In my long experience in Washington, few matters have inspired so much contrived indignation and phony moralizing as the interrogation methods applied to a few captured terrorists.” And he channeled 24’s Jack Bauer, claiming that “arguments about interrogations” and other constitutional matters involved in the war on terrorism only reveal to “the terrorists” American “weakness.”

Cheney didn’t let a demagogic opportunity slip by. Following the lead of congressional Republicans—and some Democrats—who have warned of disaster should Gitmo detainees be brought to the United States, Cheney decried the use of “US taxpayer dollars…to support them.” But aren’t US taxpayer dollars being used to fund Gitmo? And he made it seem as if Obama is about to distribute the Gitmo detainees to states throughout the United States, when surely Cheney knows that convicted terrorists tend to be dispatched to one supermax facility in Florence, Colorado. But he was on a roll—and that included bashing “the Left” for blaming America first.

Cheney’s speech was loaded with references to 9/11—and precious few to the Iraq war. He said little to justify that war. But he maintained, “our administration will stand up well in history—not despite our actions after 9/11 but because of them.” And he chided those who have second-guessed the Bush-Cheney administration or accused it of “hubris.” (Interest declared: Michael Isikoff and I wrote a book called, Hubris: The Inside Story of Spin, Scandal, and the Selling of the Iraq War.) When he finished his speech, Cheney left quickly without taking questions–though his office had told AEI he would stick around for a Q&A.

The made-for-cable-TV Obama-Cheney duel did encapsulate an important debate that the country has intermittently waged since that horrific days when two airliners slammed into the World Trade Tower, one hit the Pentagon, and one crashed into a Pennsylvania field. The AEI audience—which cheered when Cheney said American safety should never be compromised—was in a different world than the one that applauded Obama at the National Archives. It’s a stark divide. In years past, the security-first absolutists have usually held the upper hand politically. But thanks to Bush and Cheney, that shifted in the last election. But those election results will not end this debate. Cheney, for one, showed no signs he will dismount. His charge will continue—and political strategists can argue whether that helps or hurts his party (as if he cares). As for the substance of the policy debate, the real world has a way of affecting how such debates play out over the long term. But Thursday’s face-off demonstrated how far apart the two sides are. Clearly, Obama is from Venus, and Cheney is from Mars. Really from Mars.