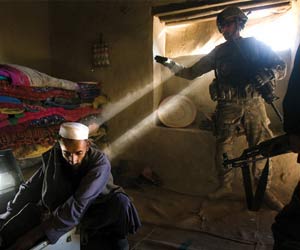 IF YOU CAN’T IMAGINE how President Obama intends to win the war in Afghanistan, you’re not alone. The challenge is daunting: Along with a handful of war-plagued African states—Somalia, Burundi, the Democratic Republic of Congo—Afghanistan is one of the world’s poorest countries. It’s been racked by 30 years of war. Millions have fled into Pakistan and Iran; tens of thousands more have been killed since the US-backed jihad in the 1980s. “The reason we don’t have moderate leaders in Afghanistan today is because we let the nuts kill them all,” Cheryl Benard, Rand Corporation specialist and wife of former US Ambassador to Afghanistan Zalmay Khalilzad, told me in 2004, during an interview for a book on political Islam. Obama’s advisers say that their plan is to surge, then negotiate—that is, beef up the US presence, stabilize the war, and then seek a deal backed by regional diplomacy. But that raises a host of questions, starting with: If negotiations are the answer, who’s at the table?

President Hamid Karzai: His government is, well, mostly nonexistent. “Forty percent of the country is either partly or entirely off-limits to the government and to international aid groups,” says Mark Schneider of the International Crisis Group. Karzai has been derided as merely the “mayor of Kabul,” but it’s worse than that: “He doesn’t have much influence with parliament, so you can’t even say that he controls the capital,” says Marvin Weinbaum, a former State Department intelligence official who advised Obama’s campaign. Terrorists strike fortified targets in Kabul, from the Indian Embassy to the Ministry of Justice, with impunity.

Karzai is struggling to regain control. By skillfully appointing governors and mayors, he’s built a cadre of officials loyal to the regime. Still, in the provinces, the government’s writ is weak. Law enforcement and the courts are virtually absent, leaving the field to criminals and drug traffickers. Corruption poisons everything: Afghanistan is ranked 176 out of 180 countries surveyed by the corruption watchdog group Transparency International; it produces more than nine-tenths of the world’s illicit opium; and criminal gangs reach from the most remote districts into Karzai’s own family—one of his brothers has been accused of involvement in the heroin trade.

The security forces: The pre-surge force of 13,100 US and 56,420 NATO troops (including 24,900 Americans) has been unable to secure Kabul and its environs, not to mention huge swaths of the south. Some NATO forces do little fighting, and some, like Canada’s, are leaving. Afghan public opinion is turning against the coalition, partly because of rising civilian casualties caused by air strikes. Meanwhile the 80,000-strong Afghan National Army can’t operate on its own, while the Afghan National Police, also numbering around 80,000, are dysfunctional, corrupt, and infiltrated by Taliban fighters; many are merely militiamen for local warlords.

The Taliban: In the 1990s, they rode to power by mobilizing armies of orphans and refugees brainwashed in Pakistani madrassas; toppled in 2001, they’ve come roaring back in rural areas where Karzai’s feckless governors and crooked cops are viewed with disdain. They use threats, blandishments, and their cultlike ideology to expand their power base, village by village and clan by clan. Yet their hold is not as firm as it might seem. Polls indicate that 9 out of 10 Afghans disapprove of the Taliban. And, notes Seth Jones, an Afghanistan expert at Rand, “Most of the tribal, subtribe, and clan leaders don’t particularly care for the central government, and they don’t particularly care for the Taliban. They are willing to switch sides.” The hardcore Taliban, he estimates, may be as small as just 2,000 to 3,000 fighters. They do, however, have allies—other militant factions, criminal gangs, and, of course, their own brethren beyond Afghanistan’s borders. In Pakistan, the Taliban shura (council) is run by Mullah Mohammad Omar, the one-eyed true believer who headed Afghanistan until 2001. Farther north, Mullah Omar’s allies include the Haqqanis, heirs to one of the more violent jihadist factions from the US-sponsored war in the 1980s, and Gulbuddin Hekmatyar, perhaps that war’s most bloodthirsty combatant, both of whom regularly dispatch fighters into contested areas surrounding Kabul. (See Your Tax Dollars at War.)

To Serve and Collect

The US government has spent more than $6.2 billion building the Afghan National Police and, by September 2009, will have paid DynCorp International more than $1.2 billion to train them. Afghan officials say the force is near its manpower goal of 82,000. But last time Pentagon officials checked, they couldn’t tell whether 38 percent of the cops on the payroll were active and eligible, and only 10,000 of the force’s roughly 50,000 donated AK-47s were battle ready. Weekly progress reports from DynCorp have documented officials taking bribes, street cops collecting unauthorized highway “tolls,” police funneling weapons to the Taliban (or joining them outright), suicide attacks targeted at officers, and cops going for months without pay.

The new players: With US advice and funding, Karzai is trying to counter the Taliban through a pair of new initiatives. The Afghan Social Outreach Program is quietly building anti-Taliban local councils. A parallel program, the Afghan Public Protection Force, has a pilot project under way in Wardak province to build quasi-official militias not unlike the US-sponsored Sunni Awakening that mobilized Iraqi tribes against Al Qaeda. J Alexander Thier of the US Institute of Peace is hopeful. But, he says, “It scares the bejesus out of people because this would result in the arming of Pashtun militias. It’s extremely risky.”

Which gets us back to the question: What’s the endgame of the surge-and-negotiate strategy? Already there is plenty of negotiating behind the scenes. Karzai has an ongoing dialogue with the Taliban, with former Taliban allies in Saudi Arabia and Pakistan mediating, and there are reports of talks involving Hekmatyar, too. But Obama’s advisers are split on whether those top-down negotiations will work: Some suspect that there can be no deal as long as the Taliban think they’re winning.

An alternative approach gaining favor inside the beltway is bottom-up negotiations to mirror the Taliban’s village-by-village strategy. “This is a country that historically has had very little central government,” General David McKiernan, the US commander, said last November. “But it’s a government with a history of local autonomy and local tribal authority systems.” Jones, of Rand, says the key is winning the loyalty of rural Afghans. If it’s done right—if America maintains a light footprint, if tribal leaders see improvements in security (as well as cold, hard cash), and if Afghanistan’s meddling neighbors can be persuaded to help stabilize the country—then the loyalties of the Pashtun tribes may turn. If that happens, Jones says hopefully, “They can tip pretty quickly.” Of course, if the surge causes more civilian deaths and further inflames anger at the United States, they could just as easily tip the other way. Therein lies the great risk of Obama’s gamble.

Robert Dreyfuss has written for The Nation, Washington Monthly, and Rolling Stone, and is the author of Devil’s Game: How the United States Helped Unleash Fundamentalist Islam.