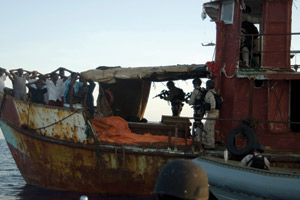 Working from a nondescript government office building near Washington’s Navy Yard, Owen Doherty spends his days worrying about Somali pirates. What preoccupies him the most is the law of unintended consequences: the idea that pirates hopped up on khat—the mild, amphetamine-like stimulant that’s popular in the region—might turn their AK-47s and RPGs on a ship carrying explosive cargo and inadvertently cause an ecological and economic disaster that could devastate the world’s shipping industry. “I think the environment out there is such that we could really have a more serious incident on a vessel,” says Doherty, director of the office of security at the Maritime Administration, or MARAD. “We’ve just been fortunate.” But fortune is fickle, so lately Doherty has been thinking of what can be done to prevent such a scenario from coming to pass.

In recent months, as pirate attacks in the Gulf of Aden and neighboring waters have skyrocketed, he’s been particularly busy. But if you’re picturing an ocean-going Rambo, guess again. Doherty is a suit, a career civil servant who until 2007 worked as a special assistant to MARAD’s administrator, where he played a central role in drafting the National Strategy for Maritime Security. Though he’s a Navy veteran and still serves as a captain in the reserves, he’s not about going in with guns blazing. “We’re not a security provider,” he explained when I visited with him at MARAD’s headquarters. Instead, Doherty’s office concerns itself primarily with issuing advisories to US-flagged ships, providing them with up-to-date intelligence on pirate attacks, and instructing them on countermeasures. Doherty also helps coordinate Anti-Piracy Assistance Teams, which at the invitation of ship owners conduct free security assessments and identify vulnerabilities that pirates could exploit.

For their part, nations have dealt with the recent uptick in pirate attacks in typical fashion by deploying naval warships to protect affected shipping lanes. Certainly the sight of destroyers on the horizon causes even the most plunder-hungry pirate to think twice before provoking them. But as Doherty acknowledges, ostentatious displays of naval power are not the answer. Criminality at sea is simply a logical extension of conditions on shore, which makes chasing after pirate crews like treating the symptoms while ignoring the sickness. Besides, the ocean is simply too large to patrol effectively, even within the relatively limited range of Somali pirate craft. In the Gulf of Aden alone, for example, putting a halt to piracy would require an estimated 60 warships, according to the Congressional Research Service (PDF); to date, concerned nations have deployed about 20. There have been instances in which these navy ships have been able to intervene, but they are few in number and generally concentrated in the narrow confines of the Gulf. With pirates increasingly operating from so-called “mother ships” in the open ocean off the east coast of Somalia, the odds of detection diminish exponentially. “When the weather gets good, and it’s calm out there, they’re still able to get ships,” Doherty says. “It’s a big area with ships coming in from all directions, which makes it very hard to patrol.”

But as big as the ocean is, Doherty’s primary concerns—US-flagged ships—are easier to protect simply because there are so few of them. Of the more than 15,000 commercial vessels plying the world’s seas, less then 300 fly the Stars and Stripes. The reason is clear enough: US-flagged ships must carry expensive American crews and are subject to strict environmental and safety regulations. Most savvy US shipowners opt to bypass the requirements by registering their ships offshore and flying “flags of convenience.” And of the few US-flagged ships now operating, even fewer venture anywhere near the Somali coast. From Doherty’s perspective, the effect is one of compression. “Instead of saying you’ve got to protect the entire area, 2 million square miles, you look at where the US-flagged vessels are and which ones are most vulnerable, because there’s actually very few,” he says.

But pirates are equally skilled at sifting the best targets from the crush of commercial ships that skirt their shores. Numerous reports suggest that they do so with the help of paid informants in European ports who help them target particular ships. Doherty acknowledges that in some cases corrupt officials abroad may be involved, but remains convinced that most attacks occur at random. “More and more it’s just targets of opportunity,” he says, with pirates chasing after commercial vessels that are riding “low and slow” in the water. Indeed, Doherty’s view could help explain how 11 hapless pirates were nabbed May 3 after attempting to seize a French naval frigate, itself part of a European anti-piracy force. Imagine their surprise when the frigate deployed commandos and helicopters in pursuit of its would-be captors.

Ultimately, securing the waterways adjacent to the Somali coast may simply be impossible. Even so, the recent attack on the US-flagged Maersk Alabama and the capture of its American captain has sparked a debate over whether American merchant ships should carry armed guards. Sen. Dianne Feinstein, the California Democrat, sent a letter to President Obama in the wake of the attack urging him to deploy them. Likewise, General David Petraeus told a House panel that although nonlethal deterrents like high-pressure water hoses can work, “it’s tough to be on the end of a water hose if the other guy is on the end of an RPG” and urged the shipping industry to “get more serious about this problem.”

Yet hiring armed guards is not something most shipowners are eager to do. For one thing, armed security is expensive, and given the comparatively low cost of paying the occasional ransom, most shipping firms are content to take their chances. Paying ransoms keeps the pirates content, too, theoretically lessening the risk both to merchant crews and their vessels. (Consider that after the Maersk Alabama incident, pirates publicly threatened to seek out and murder American mariners after Navy SEAL snipers killed three of their own.) A host of legal and insurance-related issues also come into play, many of which have yet to be worked out. Take rules of engagement. When would guards be justified in firing their weapons? And who would adjudicate allegations of illegal shootings? “There’s such a fine line between what is a pirate and what is not,” says Doherty. “You’ve got fishermen out there who carry AK-47s to protect themselves and act erratically because they’re looking for fish! Or you may be crossing where they do fish, and they may be angry at you.”

Still, says Doherty, the effectiveness of armed guards has already been proven. To supply the war efforts in Iraq and Afghanistan, the US Navy’s Military Sealift Command charters civilian ships and crews to augment the Pentagon’s capacity. Each carries a security detachment of 12 US troops. “That’s been their best anti-piracy measure, having armed security on board,” he says. Despite international resistance to replicating such protections with private contractors, the US government has so far declined to rule it out. “We want to have that as an option,” Doherty explains, adding that some American ship operators have already hired groups of armed contractors to accompany their vessels. (He declined to say which ones.) “There is a place for private security, but I think it’s really for the anomalies, where you have really low, slow vessels that can’t avoid the area.” Nevertheless, given the range of things that could go wrong by introducing gun-toting private guards to the shipping lanes, Doherty acknowledges, “there are more questions right now than answers.”