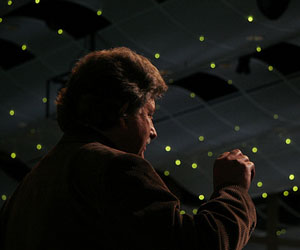 Photo used under a Creative Commons license by flickr user <a href="http://www.flickr.com/photos/30737781@N04/">usgbccolorado</a>

Okay, quick: Which portion of the US economy consumes the most energy?

Nope. It’s not transportation. Not manufacturing either. The correct answer is the building sector, which guzzles about three-quarters of the nation’s electricity and half of our overall energy—and is responsible for almost half of America’s carbon emissions.

Round two: Which sector, besides banking, has been hardest hit by the recession? You can see where this is going. Construction unemployment stands at 20 percent, more than twice the national rate. For the six months that ended in April, the building industry has shed jobs at a rate of about 120,000 per month—more than 1.2 million jobs have been lost since December 2007. Private construction, which normally accounts for about 9 percent of America’s GDP, is on its knees. For near-broke local governments, this means a shrinking tax base, new foreclosures, and more citizens and companies in need of handouts.

But what if there were a way to simultaneously revive this flagging industry, slash energy use, and reduce carbon emissions using federal stimulus cash? And what if the strategy generated all sorts of jobs and filled government coffers and kept people in their homes—even people who have nothing whatsoever to do with the construction?

Sounds like a fantasy, but Santa Fe-based architect Edward Mazria has done the math, and his “14x” plan, which he calculates will generate $14 in private spending for every stimulus buck spent, is creating buzz in city halls across the country.

Mazria was in Washington, D.C., last week pitching his plan to senators, administration officials, and perhaps more importantly, to a luncheon crowd of about 250 mayors, council members, and county commissioners at a national climate change summit hosted by the International Council for Local Environmental Initiatives (ICLEI).

Since late March, state and local officials have scrambled to secure their share of $6.3 billion in energy-efficiency grants offered by the federal stimulus package. (They have until June 25 to apply to the Department of Energy, which decides who gets what.) The politicians were riveted by Mazria’s talk, says Michelle Wyman, ICLEI’s executive director. They even stopped eating to pay closer attention, and when Mazria finished his spiel, they gave him standing ovation. “You could almost see in the audience light bulbs going on as he put flesh on the skeleton of his concept,” says Mayor Patrick Hays of North Little Rock, Ark. “It was like a preacher giving a sermon and by the end we were singing out of the same hymn book and there were ten or twelve of us lining up to be baptized.”

Mazria’s sermon took root a few short weeks ago, at one in the morning, when a sleepless Wyman emailed him with a conundrum. She knew he was a creative problem solver with street cred on climate change: Thousands of architects and construction firms, schools, nonprofits, and state and local governments have already joined the 2030 Challenge—a centerpiece of Mazria’s Architecture 2030 initiative—promising to ratchet up energy efficiency on their building projects with the goal of making all new buildings and major renovations carbon neutral within 21 years.

Wyman informed Mazria that she’d received a plea from a mayor who was under political pressure to spend $683,000 of promised stimulus money on a parking lot. The mayor knew the massive federal investment in local communities was a once-in-a-lifetime kind of thing, and he didn’t want to blow it on wasteful one-off projects. What kinds of uses for that money would have a truly lasting, positive effect?

Which got Mazria to thinking. Suppose a city were to use its stimulus money to, say, trick out a new public library with insulated windows, natural lighting, solar panels, and so on. It would make for a fine green showcase, maybe even a building that produced as much energy as it used, with modest savings down the road.

But what if that city instead took that money and said to local homeowners and businesses: If you refinance your home or building, we’ll pay the bank percentage points up front to get you a lower interest rate. In exchange, you’ll make efficiency upgrades—installing better windows, insulation, a more efficient furnace, PV panels, on-demand water heaters, whatever. The more efficient the upgrade, the more the city pays down the interest rate.

Over the next few weeks, Mazria and his staff at Architecture 2030 hammered out the details. Renovation costs could be lumped into the new loan so that the owner pays nothing up front, but still makes out with a cheaper energy bill, a more valuable property, and lower payments; a family currently paying 6 percent on a $230,000 loan, they calculated, could install a $20,000 system of solar panels and still save $425 per month—not counting a new federal tax credit that covers 30 percent of the cost.

The property owner isn’t the only one who stands to benefit from this arrangement. Local builders and banks get a shot in the arm, as do engineers, architects, and producers of building materials. New markets emerge for energy-efficient products. Contractors get back to work and fewer people lose their homes and go on the dole.

All told, Mazria says, that remodel will have doubled to tripled the value of the city’s stimulus dollar; for new construction, the city would see a 25-fold effect. (The 14x figure assumes a ratio of 70 percent renovation to 30 percent new building.) The resulting boom in construction-related spending also means higher tax revenues at all levels of government. “It builds local pots of money that cities can reinvest in more energy efficiency,” beams ICLEI’s Wyman. “It’s absolutely brilliant. Everybody wins.”

Mazria has vetted his plan with bankers at Wells Fargo, Bankers Trust, and Bank of the West, all of whom are interested in providing loans; while in Washington, he also met with the Teamsters, who are eager to get in on the green economy. The city of Des Moines, whose mayor, Frank Cownie, helped Mazria develop and pitch his proposal to state and federal leaders, has been fully on board. Cincinnati has expressed interest, too. Ditto Atlanta, Dubuque, Santa Barbara, Albuquerque, Fort Wayne. North Little Rock, population 61,000, is “absolutely” planning to file a 14x application, according to Mayor Hays.

The Arkansas contingent, in fact, is already devising new twists on the concept. Green business pioneer Martha Jane Murray, an architect and shoe factory co-owner who set up free home energy audits and energy-efficiency loans for her employees, is now considering ways to incorporate mortgage-rate paydowns into her program. By offering cheaper home loans as an employee benefit—contingent on an energy retrofit—a company could effectively give workers a pay raise that encourages them to stay put. Mayor Hays suggests that cities might even use such incentives to, say, entice police officers to live in what he calls “challenged” areas of town. “It’s a simple idea,” he notes, “but it certainly seems to hold promise for some profound opportunities.”

DOE officials seemed “real excited” about 14x, Mazria says, and will likely look favorably upon local variations of his plan as the stimulus money begins to flow in earnest in late June. (“Yes, we’re excited,” confirms Claire Johnson, the department’s efficiency advisor for the stimulus package, “but we’re excited by a lot of things. The department is always interested in innovative ways to increase energy efficiency.”)

Phase 2 of the plan would elevate the concept to the federal level. Mazria envisions dipping into the $1.2 trillion pot the Federal Reserve has set aside to buy up debt and toxic securities and bolster Fannie Mae and Freddie Mac. A mere $60 billion of that money, Mazria says, would enable the federal government to tie mortgage-rate paydowns to energy efficiency on a grand scale, leading to $572 billion in construction spending, 9 million jobs, and $40 billion in state and local tax revenue.

Best of all, the whole thing will pay for itself: Within a year, Mazria calculates, that $60 billion will have brought in a whopping $120 billion in federal taxes. “To turn the country around,” says the architect, “you need to turn the building sector around. And you have an opportunity to transform it as you’re bringing it back.”