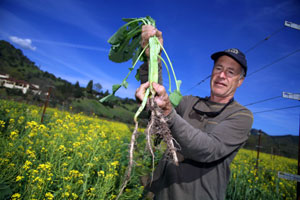 Across the pungent world of waste, a climate debate has been raging. Which is better: turning yard clippings and food scraps into compost, or landfilling them and capturing the methane that they release to produce energy?

Last month, I happened across this question while riding in a muddy pickup across the top of Altamont Landfill, a 30-story hill of garbage run by Waste Management, the nation’s largest trash collection outfit. “To me, I think it’s good to have more organics in the garbage,” operations manager Neil Wise told me. Organic matter in landfills generates methane, a potent and flamable greenhouse gas; Altamont currently captures enough methane to power 8,500 homes.

On the other side of this debate is the City of San Francisco, which this week voted to make composting lawn clippings and food scraps mandatory for every city resident. The nutrient-rich product fertilizes more than 200 Bay Area vineyards. Composting advocates worry that outfitting more landfills with “methane wells,” possibly with the aid of carbon offsets created through a climate bill, will detract from those efforts.

Here’s my take: While capturing methane from landfills is certainly worthwhile, evidence suggests that composting is far better. A nine-year study by the Rodale Institute, to be published in the next issue of Compost Science and Utilization, a peer-reviewed journal, found that applying compost to cropland sequestered a staggering 10,802 pounds more carbon dioxide per hectare each year than farming with conventional manure fertilizer. That’s more than the yearly emissions of a Chevy Impala. “That’s a pretty big deal,” says Rodale research director Paul Hepperly, the author of the study. “When you are composting, you are stablizing the carbon” in organic matter.

And though capturing methane at a landfill also reduces greenhouse gasses, it can’t match composting’s associated benefits. Compared to raw manure, Rodale also found that compost applied to farmland led to a 600 percent reduction in nitrate leaching, which can pollute steams and groundwater, and improved the soil’s retention of water by a factor of three. “This relates to looking at things wholistically,” Hepperly said, adding that the ultimate goal should be an “agricultural system that invests more in our environment and takes less out of our resources.”