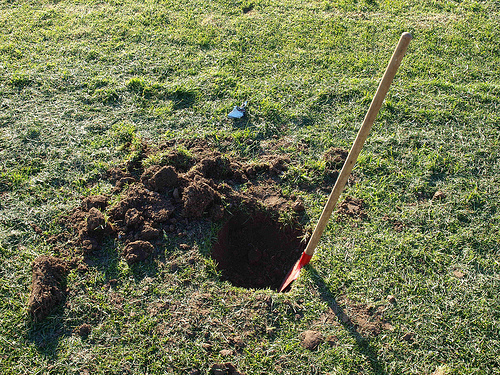 Like David, I’d been feeling kind of sorry for Mark Sanford. But it took a while for me to figure out exactly why. It wasn’t just his stream-of-consciousness confessional yesterday, with its cringe-inducing lack of modern political stage management and weirdly touching digressions on dinosaur sheets. Nor was it the fact that his plainly heartfelt emails to his mistress are now splattered all over the internet. Somehow, I realized, the details for which Sanford is being mocked actually made him seem more likeable to me.

Take, for instance, his professed love of digging holes for fun. There’s a low-hanging joke there, obviously. But I was struck by this quasi-Waldenesque passage from his email correspondence:

Got back an hour ago to civilization and am now in Columbia after what was for me a glorious break from reality down at the farm. No phones ringing and tangible evidence of a day’s labors. Though I have started every day by 6 this morning woke at 4:30, I guess since my body knew it was the last day, and I went out and ran the excavator with lights until the sun came up. To me, and I suspect no one else on earth, there is something wonderful about listening to country music playing in the cab, air conditioner running, the hum of a huge diesel engine in the background, the tranquility that comes with being in a virtual wilderness of trees and marsh, the day breaking and vibrant pink coming alive in the morning clouds — and getting to build something with each scoop of dirt. It is admittedly weird but one of my more favorite ways of escaping the norms, constant phone calls and formalities that go with the office.

In other words, Sanford appears to be a rare creature among politicians: an introvert. Someone who needs a little solitude on a regular basis in order to stay on top of things. A textbook case, if you go by Jonathan Rauch’s great piece in the Atlantic from some years back. Rauch notes that introverts typically don’t fare well in national politics, citing Richard Nixon and Calvin Coolidge as examples, and Sanford is really not helping the introvert’s cause.

Still, I found Sanford’s oddball hobbies and totally self-annihilating honesty to be a strangely refreshing departure from the usual cast of chronic narcissists and sado–meglomaniacs and pathological glad-handers that typically dominate blockbuster political scandals. I’m setting the bar really low, I know. And I don’t mean this as an excuse for Sanford’s hypocrisy or his rigidly ideological economic policies, which lacked compassion for anyone down on their luck. But in the pantheon of politicians who have screwed up on a monumental scale, he seems a little more human than most.