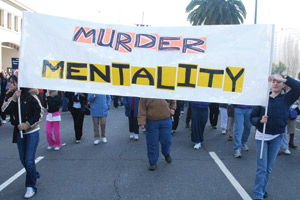 In January, 2007, I visited the Wichita, Kansas, abortion clinic operated by Dr. George Tiller, who was shot to death in church yesterday by an anti-abortion crusader. Tiller’s clinic had just become the last one in town. A shuttered clinic nearby had been purchased by an anti-abortion group, Operation Rescue, which was in the process of converting it into its headquarters, complete with a prayer garden and a memorial to the 50,000 unborn children that the group claims were murdered there. Over the next two days, I learned a lot about Wichita’s radical hothouse of abortion foes.

Troy Newman, Operation Rescue’s charismatic leader, who some have suspected is partly to blame for Tiller’s murder, drove around town with me and vented his rage that nobody had yet shut down Tiller, who he called “the abortionist to abortionists.”  A few days earlier, Wichita’s district attorney, Nola Foulston, had moved to dismiss indictments against Tiller that had been filed by the state’s outgoing attorney general. She later conducted her own investigation of Tiller and found he’d complied with the law, but Newman believed Tiller’s clinic had killed a woman. “Our field plan is to expose the lies and misdeeds that they do,” he said. “It’s pretty simple: They’re scum of the earth, they’re dirtbags.”

It struck me that Newman was deeply disillusioned with the legal system. “All laws are thrown out the window once you talk about abortion,” he complained. “In the movement, we call it ‘abortion distortion.'”

The next morning, at a bright cafe in the heart of town, Newman and two women discussed how to turn up the pressure on Foulston. Operation Rescue is famous for a strategy of harassing its foes outside their homes. “People have a public identity that they like to keep seperate from their private identity,” Newman explained, “but we believe you can’t separate the two when you are talking about killing babies. And people are more likely to listen to what you say and be influenced when you bring the issue home to where they work and live.” It was a full-court press of constant annoyance: “You poke, poke, poke until they scream,” he added, “and then you just keep poking some more.”

Despite Newman’s tough tactics, he was civil and professed to have  friends who disagreed with him on abortion. After spending two days with him, I’m willing to take him on his word that his pro-life views extend to grown humans, even abortion doctors. But it was easy to see the militaristic rhetoric of Newman, who is the son of an army recruiter, was goading people on towards something more extreme. “A lot of what we do is demoralize the enemy,” he said. “This is a battle, and that’s the strategy.”

Later that afternoon I drove to Tiller’s clinic and was promptly booted from the parking lot by a security guard. It was too dangerous to allow lone men inside, I was told when I called the clinic on my cell phone. So I parked on the curb, next to a “truth truck” that displayed a giant billboard of an aborted fetus.

Arrayed on the grassy median in front of Tiller’s walled building were rows of white crosses and the plastic figurines of a nativity scene. Writen on chalk near the building’s drivway was Psalm 94:20: “Can unjust judges be allied with you God? No!” Anti-abortion activists sat alongside the driveway in lawn chairs and pounced at any cars that tried to enter. As a frightened young woman was driven inside, one of them commented, “Another parent bringing in their daughter to have their grandchild killed.”

An abortion protester who would only give his name as Brian spoke favorably of an array of local anti-abortion groups in town. He declined to give his affiliation, but pointed out that a group called Operation Save America had bought a house just across the street from Tiller’s office. “Everybody has got a different approach,” he said, “a different style.”

Those words seem much more chilling when you consider the multiple attempts on Tiller’s life. Newman’s world is also one in which David Leach, publisher of the Prayer and Action News, which printed essays by Tiller’s alleged murderer, can tell the New York Times that “To call this a crime is too simplistic. . .There is Christian scripture that would support this.” Religious fundamentalism is still alive and well in the heartland, and isolation and defeat is likely to make some of its radicals even more desperate.