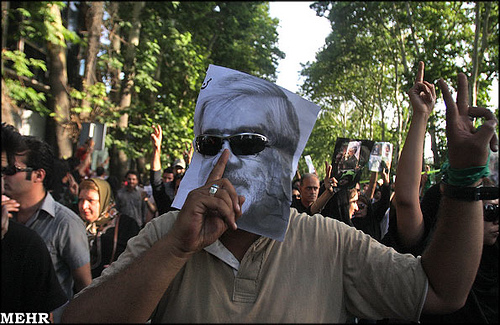 As Glenn Kessler points out in the Washington Post, Obama is in a tough spot when it comes to Iran. The natural inclination, of course, is to support the hundreds of thousands of protesters (millions, according to a friend of mine in Tehran), who’ve taken to the streets since last Friday’s disputed presidential election. But larger political and national security concerns are not easily brushed aside. The fact is, while it would be wonderful to have a reformer as Iran’s president, the mullahs still call the shots, particularly when it comes to the issue of most concern to the United States: Iran’s nuclear weapons program. Alienating Iran’s Supreme Leader, Ayatollah Ali Khamenei, with any perceived American meddling in his nation’s internal politics (a touchy issue dating back to the pre-revolutionary Mosaddeq years) could irreparably harm any remaining hope Obama may have of negotiating away Tehran’s nukes.

Even in the midst of impassioned protests, writes Azadeh Moaveni in the Daily Beast, many Iranians seem to agree with Obama’s decision to wait and see–at least if the views of her family and friends in Tehran are any indication. She writes:

But in conversations with friends and relatives in Tehran this week, I’ve heard the opposite of what I had expected: a resounding belief that this time the United States should keep out. One of my cousins, a woman in her mid-30s who has been attending the daily protests along with the rest of her family, viewed the situation pragmatically. “The U.S. shouldn’t interfere, because a loud condemnation isn’t going to affect Iranian domestic politics one way or the other. If the supreme leader decides to crackdown on the protests and Ahmadinejad stays in power, then negotiations with the United States might improve our lives”…

Other friends I spoke with cited various reasons why the United States should maintain its discrete posture. “If Obama’s position until now has been to respect Iran, then he really has no choice but to watch first how things unfold. Mousavi hasn’t produced any facts yet, no one has produced evidence of fraud,” said my friend Ali, a 40-year-old photographer. “That’s what is needed before Obama takes a major stand.”

My older relatives fretted particularly that any real criticism by the United States would be used as a pretext by Ahmadinejad to blame the protests on “outside enemies,” a reflexive response for the president when dealing with even housing inflation and the rising price of tomatoes. “It’s better for Obama to stay out of this. Given what happened with Bush in Florida, Ahmadinejad can always claim the United States is in no position to lecture anyone about fair elections,” my aunt noted.