What exactly did the Senator do wrong? Well, Nelson accepted over $2 million in campaign cash from the insurance industry. He also happened to embrace the industry’s position on health care reform, declaring his opposition to giving Americans the option of a government-run health care plan. (Nelson has since hedged a bit.)

Nelson’s behavior is an example of “Good souls corruption,” Lessig explained: “legal, even ethical acts that reasonably lead the public to wonder whether it is the merits or the money that is driving this Senator’s decision.” 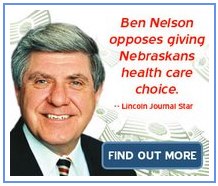 As I wrote last week, Nelson seemed to take the criticism both seriously and personally, lashing out in a defensive press release. But Change Congress hasn’t let up. This week, the non-profit launched an internet ad targeted at Nebraskans (you can see an image of the ad to the left) but this effort isn’t nearly as effective as the mailer.

Congress’ first attacks on Nelson were potent because they were harsh and they zeroed in on the issue of corruption. The original mailer asked whether Nelson would “sell out Nebraska for $2 million?” That directness has prompted politicians to respond to CC’s attacks, often emotionally. It’s the responses that will draw the most media attention to Lessig’s cause.

This latest ad is much weaker because it focuses on health care. There’s no indication that the CC is talking about what Supreme Court nominee Sonia Sotomayor has suggested are basically “bribes”—huge sums that lawmakers raise from businesses and special interest groups in order to win re-election. A more effective ad would have mirrored the mailer or just gone ahead and used the word “corruption.”

The new ad also runs the risk of pigeonholing campaign-finance reform as a liberal cause, not a public good. Government-run health insurance is a great idea, but it’s also a liberal one. Next time, the organization would do well to highlight an issue that isn’t identified so closely with the left. If Lessig really wants to change congress, he and his supporters need to convince everyday conservatives that money in politics hurts them, too.