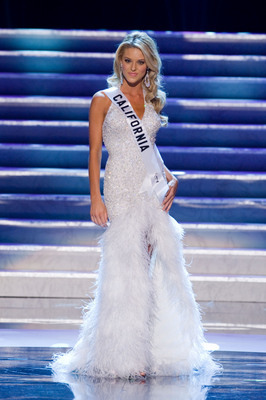 Yesterday, as I learned that The Donald handed Miss California Carrie Prejean a pink slip, allegedly because she failed to meet contractual obligations to make scheduled appearances, I had a Voltaire moment: “I may disagree with what you have to say, but I shall defend to the death your right to say it.”

Since Prejeans’s interview at the Miss USA Pageant, she has since become one of the most vilified characters in liberal America (even though San Francisco mayor Gavin Newsom defended her), as she went so far as to become a spokeswoman/unofficial lobbyist for the National Organization for Marriage.

To be fair, during the infamous pageant she was questioned about same-sex marriage by Perez Hilton, who likely had an agenda to pursue, and whose website received tons of traffic from the incident. Hilton’s question was clearly loaded, because as a judge he was aware that Prejean was a student at San Diego Christian College, a conservative, evangelical school in El Cajon, California. Also, I think Prejean’s response was actually quite tactful. When questioned by Hilton, she responded, “Well, I think it’s great that Americans are able to choose one way or the other. We live in a land where you can choose same-sex marriage or opposite marriage. You know what, in my country, in my family, I do believe that marriage should be between a man and a woman, no offense to anybody out there. But that’s how I was raised and I believe that it should be between a man and a woman.” (See the video below)

So, what really came out of this mess now that Carrie’s got the boot? Will she have to un-implant her breast implants that were paid for by the Miss USA Pagaent? Will she become the next Sarah Palin, or better yet, the next Ann Coulter? She may have a real leg to stand on, because the travesty of this incident was that it was the rare occasion when a pageant contestant departed from the traditional “world peace” answer to every question and actually spoke her mind: and for that, she was punished in a most undemocratic way. The right wing has taken up this issue, and I’d be surprised if Prejean goes down without a fight.