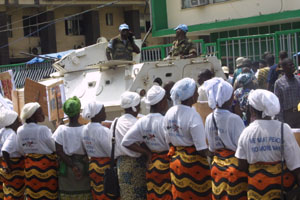 Photo: <a href="http://www.praythedevilbacktohell.com/v3/" target="_blank">Pray the Devil Back to Hell website</a>

Most activists combat current threats to justice, but last Friday, at a private screening in San Francisco, the documentary Pray the Devil Back to Hell demanded activism by revealing an egregious historic omission: women’s central role in the Liberian peace process. The film has been touring festivals since 2008 and has racked up a few awards, including Best Documentary at Tribeca. Its producer, Abigail Disney, granddaughter of Walt, heard about the Women’s Peace Initiative in 2006, when she was in Liberia “like a typical American do-gooder who didn’t really know much of anything.” As it turns out, neither did the rest of the world.

The story goes like this: Since 1980 Liberia had been in and out of brutal civil wars, mainly between the leader of child-soldier battalions, Charles Taylor, elected president in 1995, and rebel groups. As fighting approached Monrovia in 2003, Leymah Gbowee began organizing women in her church and in neighboring Muslim communities to stage a protest. Eventually, there were two thousand women sitting for days outside Taylor’s offices, holding signs demanding peace. When Taylor finally agreed to speak with them, Gbowee gave a statement requesting that he immediately engage in peace talks with the rebels. He conceded. Gbowee then sent two delegates to Sierra Leone to convince the Liberian warlords to come to the talks. Skeptical and unimpressed, they agreed.

As a hundred Liberian women sat outside the peace hall in Ghana, war raged back in Liberia. International media picked up on the talks when Sierra Leone indicted Taylor for war crimes. Taylor fled back to Liberia, leaving the warlords to plan a transitional government. The women had been sitting outside every day for six weeks when they got news that the American embassy in Monrovia had been hit by a missile, killing several members of their families. Spurred into action, Gbowee sent for reinforcements, and the women physically blocked the rebel leaders from leaving the hall before making progress.

It worked. In less than two weeks, an interim government was established and war subsided. Charles Jackson, a Liberian journalist who now lives in the U.S. and was in Accra at the time, told me he thinks “without the women, there would have been no peace agreement.” Yet no major news networks covering the peace talks or Taylor’s indictment showed the women. Because of this, much of the film’s 2003 footage came from hand-held cameras used by the women themselves. Disney found one box of film that a local TV channel had abandoned being used to keep open a window at a Ghanian NGO.

Back in 2006, Disney was surprised when the story of these women became more real the deeper she investigated. She expected the narrative to turn out to be false or an exaggeration—that it would “just puff away and disappear.” But it didn’t—and Pray the Devil, which is concise and stunning to boot, has now made sure that it never will.