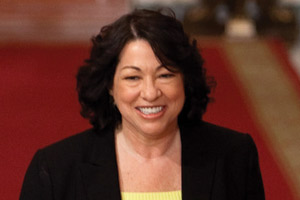 For the past month, Republicans have done their best to tar and feather President Obama’s nominee for the Supreme Court, Sonia Sotomayor. There’s been talk-radio griping about her now-infamous “wise Latina” speech, charges of reverse racism, and lots of disparaging of “empathy” for the little people. But despite all the bluster, the GOP has secured just three known votes against Obama’s nominee to replace retiring Justice David Souter, and they come from the party’s far-right fringe: Pat Roberts (R-Kan.), James Inhofe (R-Okla.), and Sam Brownback (R-Kan.). That’s not much of an army for a confirmation battle.

Some conservatives seem perplexed that their attacks haven’t inflicted more damage. But they shouldn’t be. One revealing clue came in an endorsement last week, when Mother Jones reported that former Clinton special prosecutor Kenneth Starr had endorsed Sotomayor. Starr is a die-hard conservative and towering icon of the religious right. But in his legal practice, he often represents business interests—a major GOP constituency that often trumps the party’s fealty to its evangelical wing. With Democrats in control of the Senate, the GOP just doesn’t have the numbers to keep Sotomayor off the bench (barring pubic-hair-on-the-Coke-can-type allegations or other emerging scandals). Regardless of how the base views her opinions on abortion or the death penalty, anyone who might have an issue before the court is loath to antagonize a woman who’ll likely be deciding their cases.

Starr himself has a pending Supreme Court case that Sotomayor will hear next term if she’s confirmed. He represents a group called the Free Enterprise Fund, which has sued a nonprofit board created by the Sarbanes-Oxley Act to beef up corporate accounting standards. The suit alleges that the Public Company Accounting Oversight Board is unconstitutional because, among other things, it violates the separation of powers doctrine. If Starr wins, the suit could potentially impede the Securities and Exchange Commission’s ability to take action against accounting firms—and force Congress to overhaul the entire act, which is deeply unpopular on Wall Street.  The DC Circuit Court of Appeals rejected the suit in 2008 in a 2-to-1 decision. But the Supreme Court recently agreed to hear the matter next term, and Starr is no dummy. He certainly doesn’t want to alienate Sotomayor by publicly opposing her. But he also has a lot to gain by endearing himself to the novice justice with a generous public endorsement.

Starr is not the only person making that calculation. So far, the business community is cautiously reviewing her record, and hasn’t officially jumped into the fray. But when it does, it will probably support her.

The US Chamber of Commerce, the world’s largest business lobby, has endorsed every single Supreme Court nominee going back to Ruth Bader Ginsburg in 1993. This is a sign of the Chamber’s pragmatism, but also of the significant influence it likely wields during the selection process. (The Chamber makes its own recommendations to the White House for nominees.) On Tuesday, Robin Conrad, head of the National Chamber Litigation Center, which is involved in dozens of cases pending before the Supreme Court, said the group was still evaluating Sotomayor’s record. But she admitted that the Chamber treads carefully when it comes to nominations because its members have so much at stake at the court.

Indeed, business cases now constitute nearly half of the Supreme Court docket, according to Conrad, another reason some of the attacks on Sotomayor are missing the mark. The hot-button social issues that tend to fire up the foot soldiers of both the right and the left simply aren’t that common anymore. In the past 10 years, for instance, the court has only heard four abortion cases. By comparison, in its last term the court heard three cases involving federal preemption, a decidedly unsexy issue but one the business community cares about deeply. While evangelical Christians have been major players in elections over the years, their influence often stemmed from their potent alliance with pro-business conservatives. When it comes to court fights, however, the business wing has its own distinct interests to protect. Without corporate support, the right-wing opponents of Obama’s nominee aren’t carrying a very big stick these days.

Obama, too, has been extremely savvy in neutralizing much of the right-wing opposition by picking a nominee who has virtually no record on the most contentious social issues despite 17 years on the federal bench. Gay marriage? Nope.  Separation of church and state? Barely. And as for the “litmus test” issue for both sides? Sotomayor’s only abortion-related decisions came in relatively inconsequential cases in which she actually upheld the arguments of the right-to-life groups. In fact, her abortion record is so murky that it’s made liberals suspicious. That’s why, on June 5, Rush Limbaugh suggested that maybe Sotomayor ought to be confirmed. Noting that she’s Catholic, he said, “I have to say that there’s a better-than-50-50 shot she’s pro-life…I could see being in favor of this nomination were she pro-life. Certainly could.”

With Limbaugh wavering, the GOP is getting increasingly desperate in its attempts to torpedo Sotomayor’s confirmation. Senators Jeff Sessions and John Cornyn, the GOP point men on the nomination, took to the floor on Tuesday to discuss her record. Their comments suggested that the GOP now plans to make gun control the focus of their attacks on Sotomayor, who decided a case earlier this year in which she ruled that the 2nd Amendment doesn’t apply to the states.  Sotomayor’s position has been a matter of settled law for a very long time and was recently supported by conservative luminary 7th circuit judge Richard Posner in a similar case. The argument is so weak that even the NRA has only tepidly advanced it.

The NRA’s leaders are a pretty savvy bunch. Like big business, they may have seen the writing on the wall and decided that there’s no point in alienating a future justice who, given her prosecutorial background, might one day prove sympathetic to their cause. In the end, the only people still vocally opposing Sotomayor are those with no skin in the game, like Brownback, who’s not running for another Senate term, and a few right-wing activists like immigration foe Pat Buchanan and Grover Norquist, president of Americans for Tax Reform. It’s easy for them to throw rocks because they have nothing to lose, but for just about everyone else in political life, opposing Sotomayor could easily come back to haunt them.