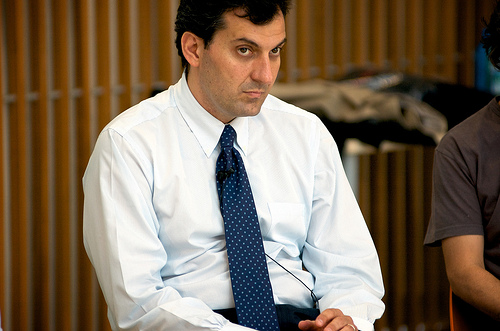 Photo from Flickr user luca.sartoni and used under a Creative Commons License

In 2009, when you hear the word “terrorist,” who and what comes to mind is no secret. However, many of us forget that in the 1970s, leftist terrorism was a major cause for concern. In the US, it was the Weather Underground, Symbionese Liberation Army, and Black Liberation Army who were the main proponents of these unlawful tactics. But Italy was the true global epicenter of these movements. From the late 1960s through the early 1980s, legions of Italy’s most radical communists (led by the Red Brigades)  terrorized their country with regular bombings and murders in an era that became known as “The Years of Lead.“

In Pushing Past The Night, journalist Mario Calabresi (currently the managing editor of Italy’s La Stampa newspaper), takes readers back to these troubled times, starting with the events that led to the brutal murder of his father Luigi on May 17, 1972, when the author was just two years old. Calabresi goes to great lengths to explain why misguided left wing radicals have for years symbolically invoked the name of Luigi Calabresi when using propaganda to justify other heinous actions. With a remarkably beautiful translation into English by Michael F. Moore, Calabresi weaves back and forth between the 1970s and the present day, illustrating the lack of justice for Italy’s criminals (many obtained immunity by moving to France or have been let off because of the statute of limitations, and some have even become high-ranking elected officials) and the falsehoods in the national consciousness surrounding the death of his father. To debunk the claims made by leftists that his father was guilty of a crime, Calabresi carefully and scientifically has many experts recreate the events of the death of Giusseppe Pinelli (whom the leftists claim his father killed), leading to the solid conclusion that Luigi Calabresi is innocent of all wrongdoing. Calabresi’s discussion of how many of Italy’s former terrorists became acclaimed scholars, intellectuals, and philosophers while serving little to no time for their crimes depicts the chaos and inadequacy of the Italian justice system, as well as how faux-revolutionaries are made into pop culture heroes.

What I appreciate so much about this work is Calabresi’s ability to create such rich emotion while retaining his own values and morals. For instance, when writing about the Italian government’s failure to inform his family that one of his father’s murderers was released from prison, Calabresi notes, “I don’t think the government should be required to seek victims’ permission before passing laws or deciding whether to grand a pardon, parole, early release or supervised furloughs. Such matters should be carried out in the general interest, which might not coincide with the interests of the ‘families of the victims.’ If the state, the judiciary, the government or the president thinks that an act is appropriate, necessary, and justified, then the pain of private citizens should obviously not be an impediment.”

This memoir presents history through many angles on poignant subjects that most Americans would likely only be aware of if, during the 1970s, they attentively read the foreign section of a national newspaper. For the rest of us, catching up on what we missed by reading Pushing Past The Night is the next best thing.