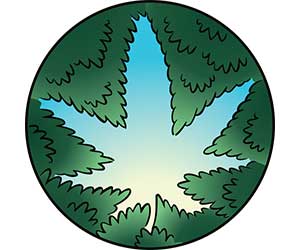 EARLY ONE MORNING in August 2005, a small team of game wardens and deputies climbed through coyote brush and manzanita in the Sierra Azul Open Space Preserve outside San Jose, California, searching for an illegal pot farm. As they crested a ridge, they discovered densely planted rows of cannabis stalks. Suddenly, a high-powered rifle cracked and an officer fell to the ground, shot through both legs. Seconds later, another deputy shot and killed a man wielding a sawed-off shotgun. “It was literally like a jungle firefight,” recalls warden John Nores, who fired at the other shooter before he escaped into the woods. Left behind in a meadow just minutes from the heart of Silicon Valley were 22,000 marijuana plants worth some $88 million.

Over the past decade, marijuana patches known as “grows” or “gardens” have sprung up on public lands across the West, including a third of California’s national parks and nearly 40 percent of all national forests. Where hippies once grew just enough weed to peace out, traffickers now cultivate more than 100,000 plants at a time on 30-acre terraces irrigated by plastic pipe, laced with illegal pesticides, and guarded by men with MAC-10s and Uzis. Grows have turned up everywhere from the deepest backcountry to the edges of suburban subdivisions. Farming pot on public land can be more profitable than smuggling it across the increasingly militarized border. The 3.1 million pot plants seized in national forests in the year prior to last September had an estimated street value of $12.4 billion.

Rangers and game wardens say pot growers are a major threat to California’s 23,500 square miles of wilderness (which doesn’t include state or regional lands). “These guys literally create cities within your national forests,” says Laura Mark, a special agent with the US Forest Service. Growers clear land year-round, plant crops in the spring, and haul out the harvest in the fall, often leaving behind mounds of trash and dead animals, denuded hillsides, and streams full of sediment and human waste. Last year, the community of Snow Creek, California, traced feces in its water treatment plant to a grow in the nearby San Bernardino National Forest. Restoring the 10,000 acres of national forest fouled by pot farms could cost more than $30 million.

Pot farmers who till public lands avoid the risk of forfeiting their property if they’re busted, but they must also ward off competitors. “They are going to point guns at you first and ask questions later,” says Troy Bolen, the Bureau of Land Management’s head of law enforcement in California. In the past decade, growers have killed two people who have stumbled upon their fields, held nature lovers at gunpoint, and had numerous shoot-outs with cops. Last year, in California’s national forests the state’s anti-grow task force killed one grower and arrested 177, 80 percent of whom were Mexican citizens.

Officials believe that Mexican drug cartels control the grows, but proving that is tough. Last year, Nores caught a pot grower who revealed almost everything about his operation but said he didn’t know whom he worked for. “They’re kind of set up like terrorist cells,” he observes. After the bloody 2005 ambush, he says, his team now treats raids like potential battles, bringing along medics and keeping air support on standby—just in case.