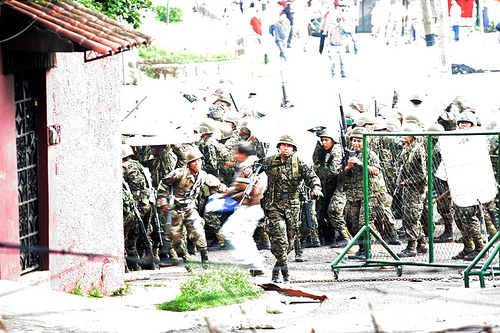 There was a coup in Honduras this weekend (the first successful one in Latin America since the end of the Cold War), but if you didn’t know about it, you wouldn’t be alone. Even if you heard the news, you might not know much else about the ex-banana republic located between Guatemala and Nicaragua. The small Central American nation of Honduras has produced none of the famous musicians or controversial populist demagogues that pique our interest, although deposed president Manuel Zelaya is a close friend of Venezuela’s Hugo Chavez. But now that President Obama has roundly condemned the coup and pundits are calling it a litmus test fo democracy in the region, there’s a few things you might want to know.

*According  to extensive research, academia, news reports, Honduras hasn’t visibly changed much since the days of Yanqui Imperialism. Just to be sure, I called my twin sister, who traveled the whole country by bus while working for Save the Children and said that Dole still has a significant presence, as do Mormon missionaries for whom Honduras is now a number one destination.

Unfortunately, it’s not a number one destination for much of anybody else, except maybe the US Marines who came back seven times between 1900 and the late 1930s. Thereafter, the US happily tolerated coup after coup, dictator after dictator, until the 1980s. After that, a militarized Honduras was our proxy in the fight with the Sandistas in Nicaragua, and later, a bulwark against Latin America’s pink populists. USAID spends about $50M a year in Honduras while the country languishes in quasi-destitute poverty, its citizens sewing Hanes t-shirts and shipping bananas and pinapples out of San Pedro Sula, the economic engine of the country. According to my sister “it’s like if every single person in Mexico had to go to Ciudad Juarez to get any sort of work.”  Meanwhile, its legion of emigres are the butt of every Mexican joke.

Left-leaning populist Zelaya wanted to turn all that around, but after he pushed too hard for an unpopular constitutional referendum, he found himself on the wrong side of a strong (formerly US-funded) military, ripped from his Presidential Palace bed in Tegucigulpa last Sunday and sent packing to San Jose, Costa Rica, in his pajamas.

Things like this weren’t supposed to happen anymore, not after W’s lackluster support for the failed 2002 coup against Chavez, not in the New Latin America. Zelaya said he’s headed back to his homeland on Thursday. If he fails, it may mean dark days ahead for Latin American democracy.