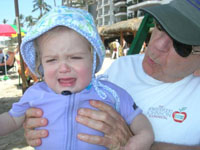 “Trillions in Spending, Billions for Babysitters? Nancy’s ‘Nanny-State’ Enshrined in Legislation”—thus begins a policy document quietly released by the House Republican Conference (HRC) as the House Democrats introduced their big health reform package a couple of weeks ago.

The provision of the House megabill singled out for ridicule used to be a separate bill, HR2667, with one lonely GOP backer, Rep. Todd Russell Platts of Pennsylvania. As the HRC notes in its one-page brief, this provision would give states $1.75 billion in dedicated federal funds over five years to “improve the well-being, health, and development of children” via home visitation programs. It’s intended to help teach low-income parents how kids develop, their age-appropriate behaviors and health issues, and “activities designed to help parents become full partners in the education of their children.”

That’s the GOP’s interpretation, anyway. So the HRC brief is ridiculous on its face. But one section is particularly worthy of a double take. (The document, buried under “legislative documents” on the HRC’s website, was brought to the attention of Mother Jones by an advocacy group called Voices for America’s Children.)

Oh, come on! was my first reaction. The House pit bulls were just being facetious. Or were they? Read from their memo:

While the $1.75 billion in potential federal funding for babysitters is intended to improve child health and wellness, several alternative forms of spending could have a positive effect on each of America’s 21 million children under age 5 at a lower cost to the federal government:

Now, to be fair, the Republicans don’t really want to spend money on this stuff. They’re making a point. But there are probably intelligent arguments to be made against the Democratic provision. Making a point with flawed third-grade reasoning simply highlights the party’s weakness and leaves it open to ridicule—like this post. Is HRC chairman Mike Pence (R-Indiana), whose name graces the header of this absurd memo, seriously equating Baby Einstein DVDs, free strollers, or subsidizing someone’s date night with an earnest effort to help struggling parents improve their child-rearing skills?

Since we’re already so far down this Republican rabbit hole, we might as well fall in a bit farther: Need I point out that Baby Einstein is simply an electronic babysitter. Send copies my way—please! No, but seriously: “Studies have shown that there really hasn’t been any positive childhood gain from Baby Einstein,” says David Laird, director of government affairs and policy for the abovementioned children’s advocacy group. “It’s embarrassing.”

(Coincidence? President Bush honored Baby Einstein’s founder Julie Aigner-Clark, whose husband was a GOP donor, at length during the 2007 State of the Union speech. And not long after, we reported that the Federal Trade commission had previously filed a complaint against the company and others for misleading consumers about the educational value of their supposed baby-stimulating products. On education, the Bush crowd also liked this guy.)

HR2667, of course, was never intended to help “America’s 21 million children” under 5, as the Republican memo misleadingly notes, but rather targets a far smaller number of low-income families who both desire and can presumably benefit from parenting help. If it gets past the infantile pit bulls, this provision will mark the first time ever that states can receive federal money specifically for this purpose. “What shocked many of us who work on this issue is that home visitation has always been a bipartisan issue,” Laird says of the HRC brief.

He goes on to recount an anecdote about how Senator Kit Bond, as Missouri’s governor during the 1980s, refused to sign a package of legislation state lawmakers desperately wanted until they agreed to give him a statewide home-visitation bill. “In the past, Republicans have always been sold on the evidence-based results,” Laird tells me. “We know that home visitation services save taxpayers money in terms of reduced child abuse, a reduction in juvenile delinquency, fewer kids in special education, higher high-school graduation rates, higher family earnings, and I could go on.”

Even if the visitation provision were indeed aimed at all families, the GOP’s “evening of babysitting” calculation is way off the mark. Dividing $1.26 billion by 21 million kids gives you $60 per kid. Now I don’t know what you rich guys pay sitters down in the OC, but the going rate here in the land of Gay Pride is about $8 per hour per child. Do the math: That means a 7.5-hour date night. Hey, I’ll take it, but it doesn’t jibe with reality.

(Please keep in mind, dear reader, that this is all just wanking: The health reform bill, flawed though it may be, has nothing whatsoever to do with babysitting.)

Now the Spock thing, that isn’t such a bad idea. Except, perhaps, that low-income parents, especially single ones, are often too busy making ends meet to dedicate much time to reading—and some of them probably aren’t the most voracious readers to begin with because their parents didn’t spend enough time reading to them when they were kids. Which, come to think of it, is another case against giving people a bunch of electronic babysit…, er, Baby Einstein DVDs. Now children’s books, that I could understand.

Spock might not go over so well anyway. The good doctor is a bit out of vogue, after all—his iconic baby tome doesn’t even make Amazon’s top 100 “parenting and families” books, whereas in the top 50 you’ll find Dr. Sears’ The Baby Book, the What to Expect series, and even Tori Spelling’s Mommywood.

You see, Tori is dating, but the HRC folks are just dating themselves.

PS—Since you asked, yeah, that is my daughter in the photo. We read to her every day.