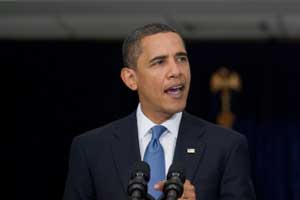 Barack Obama certainly knows how to play the press to his advantage. On Wednesday night, he turned a presidential press coverage into an informercial for his leadership on health care reform. As question after question regarding his effort to remake the country’s health care system was posed, the president turned each into an ongoing tutorial that demonstrated he’s in command of the policy details and the big picture.

Which is crucial. Ultimately–and maybe very soon–Obama is going to have to sell a health care reform package as his plan. Let’s face it: for most Americans, it’s going to be difficult to understand the specifics of this complicated piece of legislation. And Republicans and industry groups yearning to defeat whatever is produced by Congress will look to whip up opposition and skepticism by focusing on a few details that can be made to seem unappealing or frightening (in or out of context). They will also rely on debate points that sound reasonable: Shouldn’t we take our time when it comes to changing the entire health care system? Why rush through a program that could add costs or cause more problems when the economy is already on its knees?

To prevent such rhetoric and arguments–demagogic or not–from scuttling health care reform, Obama will essentially have to say, Take it from me, this is good legislation that the country needs now. And to do so, he will have to have a boatload of credibility. That’s what he displayed in the East Room of the White House.

He began with opening remarks in which he tried to present an easy-to-fathom bottom line: “I realize that, with all the charges and criticisms that are being thrown around in Washington, a lot of Americans may be wondering, ‘What’s in this for me? How does my family stand to benefit from health insurance reform?'”

No surprise, he had an answer ready:

If you have health insurance, the reform we’re proposing will provide you with more security and more stability. It will keep government out of health care decisions, giving you the option to keep your insurance if you’re happy with it. It will prevent insurance companies from dropping your coverage if you get too sick. It will give you the security of knowing that, if you lose your job, if you move, or if change your job, you’ll still be able to have coverage.

It will limit the amount your insurance company can force you to pay for your medical costs out of your own pocket. And it will cover preventive care like check-ups and mammograms that save lives and money….And, finally, no insurance company will be allowed to deny you coverage because of a pre-existing medical condition.

This is nothing he hasn’t said before. But perhaps more Americans are listening now that the sausage-grinding is under way. And all this sure appears to be a good deal for many.

Each of Obama’s replies was drenched with facts and figures–but each was accessible and easy to absorb. He claimed that two-thirds of the tab of health care reform will be covered by cutting costs and increasing efficiencies (and pushing wellness). He noted that he had wanted to reduce tax deductions for wealthy people to pay for the last one-third, but that Congress will probably come up with another funding mechanism–which he will only support if it doesn’t place more tax burdens on middle class families. He explained that he has called for quick passage because “if you don’t set deadlines in this town, things don’t happen.” He spoke favorably about a Republican-instigated plan to lower Medicare and Medicaid costs. He maintained that Americans will have to give up care that is driven by fee rates not best practices. He acknowledged that people were right to feel “queasy” about all the trillions of dollars being tossed about in Washington, while repeatedly contending that investing in health care reform was vital to the well-being and competitiveness of the economy.

Policy wonks and legislators can–and will–argue about Obama’s assertions. But he uttered everyone with confidence. Those Americans who want to believe in him and whatever health care package he eventually okays–he’s still not favoring particular legislative specifics–will have cause to do so.

But what Obama didn’t say was also interested. Not once did he call upon Americans to get involved in the legislative process. He didn’t pull a Reagan.

In Ronald Reagan’s first months as president, he delivered several speeches urging Americans to support his ambitious economic plan, which involved tax cuts for the wealthy and severe reductions in social programs. Many Americans responded by flooding the House and Senate offices with phone calls demanding that the legislators support Reagan’s initiative. Even though the Democrats controlled the House, this scared enough moderate and conservative Democrats into bucking Speaker Tip O’Neill and voting for Reagan’s package. It passed.

During the Wednesday night press conference, Obama asked for understanding and support, but not participation. The off-shoot of his campaign, Organizing for America, which is part of the Democratic Party, has been powering up a nationwide organizing effort to support health care reform in general (since there’s not one bill yet that the White House has embraced). This operation could do a lot with the list of 13 million Obama supporters it inherited from the presidential campaign. Still, Obama did not attempt to fire up his followers. His remarks on Wednesday evening were more about what he wants to do for you, not what he wants you to do for him. There was no Jerry Maguire-like call: help me to help you.

Perhaps that will come. It’s hard to imagine legislative success for a decent overhaul of the health care system without pressure from the public. And given that it seems as if Congress will not finish the job by August 7, when the congressional recess starts, Obama, for good or bad, will have time to shift from eloquent explainer to power-politics leader.

Did Obama make a mistake at the end of his press conference when he blasted the Cambridge, Massachusetts, police for acting “stupidly” when they arrested Skip Gates outside his house for disorderly conduct the other night? No doubt, this will become fodder for talk radio, maybe even cable news. (An hour-long special on Fox News?) What happened at Gates’ home is somewhat in dispute. And even though the charges against the Harvard professor were dropped, the police might feel compelled to reply to Obama’s blast, creating a dust-up that Obama doesn’t need. After all, it doesn’t take much to stir a controversy when an episode involves race and law enforcement.