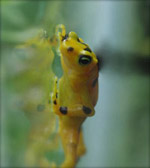 This week, we will focus on positive contributions that people are making to combat the extinction of frogs worldwide:

– In Panama, American and Canadian ex-pats are working to save the golden frog (pictured above).

– At Hartwick College in Oneonta, New York, and Plymouth University in England, professors are learning about why tadpoles have been turning into deformed frogs at incredibly alarming rates.

– Inmates in Washington state are making the most of their sentences by breeding frog species that have rapidly declined in recent years. Check out the video below for an amazing related story:

On a sidenote, today I entered the Save The Frogs poetry competition (deadline at midnight tonight) by submitting the following entry:

I entered the swamp, in search of a frog
His name was Mudraker, he hailed from Prague
Though he spoke Czech, his issues were global
Rapid decline, much worse than Chernobyl.

Mudraker came to the US of A
But non-native bull-frogs, scared him away
He battled pesticides throughout the year
Habitat destroyed, he remained austere.

His friends, victims in a deadly abyss,
finished from chytridiomycosis
Don’t surf the net or drive Mitsubishis,
Now’s our last chance to save these species.