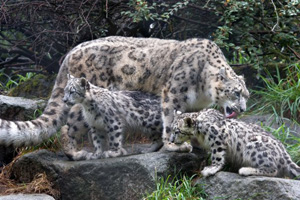 Russian Prime Minister Vladimir Putin struck a blow for wildlife this week, reintroducing critically endangered snow leopards to the Caucasus where they have been extinct since the 1920s. Putin’s act was the fulfillment of a promise he made earlier after Russia won the 2014 Winter Olympic Games. It’s a move, some say, meant to reduce anxieties that construction for the Olympics will damage the local environment.

Though the snow leopard became extinct in the Caucasus, there are still an estimated 6,000 of the big cats living in the Central Asian mountains. It’s hard for scientists to know exactly how many snow leopards truly exist in the wild, since the animals live between 10,000 and 17,000 feet elevation. Getting to snow leopard habitat is dangerous–due to unstable local politics as well as the intense cold–so instead of setting up observation posts, researchers sometimes set up camera traps to collect data. Although the leopards’ harsh natural habitat provides some measure of protection, poaching continues to be the main threat to the species: the animals’ beautiful, distinctive coat is highly valued and their bones are used in traditional Chinese medicine. Climate change, it’s been suggested, will also reduce available habitat and possibly prey species.

The cats have 3-foot-long bottle-brush tails (nearly half their body length) which they use for balancing on steep hills, and as a nose-warmer/scarf when sleeping. Snow leopards prey mostly on the sure-footed deer and sheep that share their rocky home, but will also go after smaller animals like rodents and hares. They can leap 30 feet in a single bound, and drag away prey many times their own body weight. Shy and solitary, snow leopards hunt alone and are nearly silent as they stalk prey on their wide, fur-lined paws. One biologist who’s observed the cats told National Geographic, “If [a snow leopard] knocks a stone loose, it will reach out a foot to stop it from falling and making noise.”

Despite the fact the snow leopards’ mountainous habitat is poorly mapped by biologists, an estimated 800 of the animals can be found in zoos. It’s not known how long the cats live in the wild, but in captivity they’ve lived to 21 years. Snow leopard kittens, like these ones born in Seattle this summer, are pure gold for zoos. But to learn more about snow leopards in the wild, check out the Snow Leopard Trust.