That’s the thesis of Michael Lynch, a former MIT energy expert turned consultant, in a lengthy New York Times op-ed published last week. “Like many Malthusian beliefs,” he writes, “peak oil theory has been promoted by motivated groups of scientists and laymen who base their conclusions on poor analyses of data and misinterpretations of technical material.” Lynch concludes that oil will come down to $30 a barrel as new supplies come online in the deep waters off Africa and Latin America, in East Africa, and “perhaps the Bakken oil shale fields of Montana and North Dakota.”

Setting aside the pitfalls of oil shale, it’s probably worth noting that Lynch is not your average oil supply forecaster. He’s a frequent guest on talk shows who is famed for attacking Peak Oil with the same zeal that proponents defend it. Lynch is one of many disparate voices quoted in a 2005 Times piece, “On Oil Supply, Opinions Aren’t Scarce.”  And way back in 1998, he wrote “Crying Wolf: Warnings About Oil Supply,” where he made some of the same points as he did last week.

It’s worth noting that 1998 marked the birth of the modern Peak Oil movement with the publication, that same month, of “The End of Cheap Oil,” a Scientific American piece by Colin Campbell and Jean Laherrere, two oil industry veterans every bit as qualified as Lynch. Campbell was Amoco’s former chief geologist for Ecuador, who spent a decade studying global oil production trends.  Laherrere supervised production techniques worldwide for Total. All of this is to say that the Peak Oil theory is not just a bunch of blog chatter, as Lynch would have us believe.

Still, sometimes those bloggers manage to shed some light on this arcane debate, as Kevin Rietmann, aka The Dude, did on the Oil Drum, the main online gathering place for the peak oilers, last Thursday. Rietmann broke down a graph comparing the accuracy 2008 oil supply predictions made by Campbell and Lynch in the mid-90s (see below). The result? Campbell underestimated 2008 production, which was just shy of 74 million barrels per day, by 4.79 million barrels per day. But Lynch was even further off, overestimating production by more than 12 million barrels per day.

Of course, as your stockbroker will tell you, past performance is no guarantee of future profit. Wars, hurricanes, and botched geological assumptions can quickly throw off forecasts, or not. That’s why the safest approach is often to consider a wide range of projections from multiple experts. And when you do that with the global supply of conventional oil, one thing is clear: we are running out fast. 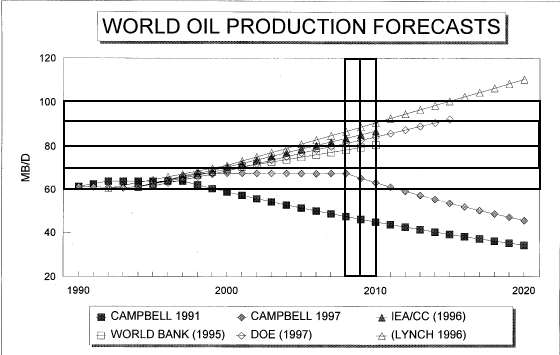