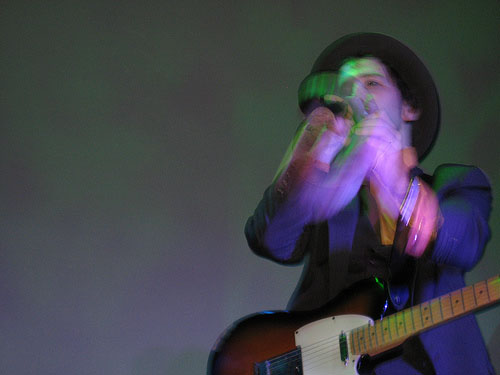 Tonight, Jews around the world celebrate the dawn of year 5770. Tomorrow night, a lucky few will get to rock out to “Hidden Melodies Revealed,” a free, live remix of traditional cantoral music by an indie-rock dream team.

Jewish religious music, like the religion, is notoriously change-averse, and very few have successfully introduced new tunes to the litergy. The Sway Machinery—consisting of members of Arcade Fire, Balkan Beat Box, Antibalas, and the Yeah Yeah Yeahs—doesn’t hope to do that, exactly, but the musicians are planning to introduce the crowd to a radical reimagining of High Holiday cantoral music. The supergroup chose Temple Emanu El in San Francisco, erstwhile home of famed singing rabbi Shlomo Carelbach, to reinvent the sacred music of the past, transforming a purely vocal tradition into a thumping, instrumental celebration of Judiasm’s venerated back catalogue. Sway frontman Jeremiah Lockwood of Balkan Beat Box gave us the inside dirt.

Mother Jones: Saturday is the second night of Rosh Hashanah. What’s the significance of playing then?

Jeremiah Lockwood: It’s the center of the spiritual cycle of the year. Rosh Hashanah is the big show for the cantor, the time they get to shine, and the whole community gets together. Growing up, my grandfather was a great cantor, and for the last 30 years of his career, he only sang for the High Holy Days. It always seemed to me to be the nexis of all the culture of cantoral music was going towards this one moment. Part of my musical concept for the band is that I was going to take this vocal music tradition and work with the melodies and create instrumental music and rhythmic accompaniment to it.

MJ: Is that a challenge?

JL: It’s a non-pulse-based music. It doesn’t use rhythm the same way we think of rhythm. The rhythm in cantoral music is all based on phrases and individual, discrete ideas rather than being one continuous pulse. But what I do is find different pulse patterns that work well with the music. It makes it more accessible for the modern listener.

MJ: What do you think of cantoral music in general?

JL: It’s in a degraded state in most of the Jewish world. There are a few great older-generation cantors that are still living and a handful of young guys that come from cantoral music families. Your average cantor that graduates from cantoral seminary, they don’t have a deep knowledge of tradition. It’s a job for them.

MJ: San Francisco is home to lots of Jews, but it’s not a particularly Jewish city. What brought you here?

JL: I feel like San Francisco is going to be like our second home. It’s the city that we’ve played in the most besides New York. We’ve had a wonderful partnership with organizations in San Francisco.

JL: I just moved to Crown Heights [Brooklyn]. It’s a very interesting, intense meeting of the different parts of the New York world. It’s all worlds meeting in one place, which is in line with my musical philosophy.

MJ: Are you concerned at all that some people might not come because it’s on the holiday?

JL: Obviously it’s on yontif, but I think for people who are more observant, it can be an especially cool experience. No money is changing hands, so people can come and listen to this music after having prayed in a more traditional way.