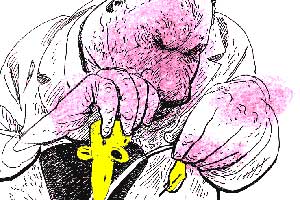 The Senate Finance Health Bill that has been the result of very effective “consultation” with the Insurance Industry (oooh nooo, no public option!!!!) is now confronted by an industry “report” that states clearly that ANY reform will cause premiums to go up by more than $4,000 per family. Anthony Weiner sees this as an opportunity.

Appearing on MSNBC, Rep. Anthony Weiner (D-N.Y.) was asked about the hot news of the day on the health care front: a new report commissioned by America’s Health Insurance Plans, which concluded that, under the Senate Finance Committee’s legislation, family premiums would rise more than $4,000.

While dismissing the report’s findings as typical of an industry that seeks to protect its profits, the New York Democrat also made a fairly salient point. The analysis basically assumes that insurers will raise their rates because the finance committee won’t make the pool of consumers more desirable for them. All of which lays out the logical case for providing consumers with a cheap and available alternative, set up and administered by the federal government.

“I think in a strange way and obviously they didn’t mean this, the health insurance lobby fired the most important salvo in weeks for the option,” said Weiner. “Because they have said clear as day… they’ll raise rates 111%.”

“Here is a tell,” Weiner offered earlier. “If you have the health care industry complaining that we’re going to raise costs because of these changes, it is then putting us on notice that we haven’t put enough cost containment in the bill. You know if the health care industry themselves is putting out a whole report saying that, that should be a tell to the Baucus team that, you know what, maybe it is time to go back and revisit the public option.

“But the other thing that is interesting here is the deal was always good for the health care guys. Look, you’ll get all these new customers coming in and that is going to be the reason that you’re going to take a haircut here. But make no mistake about it, if the health care industry keeps raising costs, and I think this is what’s going to happen with the Baucus bill, we’ll put new requirements on them, they’ll raise costs. And whatever subsidies we are giving people to buy their own insurance, they won’t be able to afford it. And we’ll keep on losing people. This is the whole argument for the public option. It is right here laid out by the health care industry right now.”

The congressman’s argument seems eminently logical. Indeed, champions of the public option essentially make the case that the provision is necessary because private insurers won’t simply bring costs down on their own. The report commissioned by AHIP and put together by PricewaterhouseCoopers hints as much—making the case that the Finance Committee’s bill can’t and won’t reduce long term costs because it does not require enough young, healthy consumers to buy insurance.

And here’s Wendell Potter, once again, telling it plain: