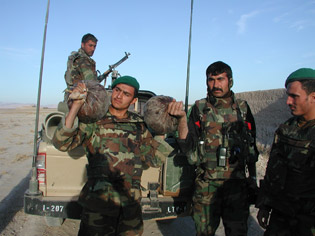 Afghan National Army soldiers display more than six kilograms of opium discovered in a former insurgent safe house in the Farah province of Afghanistan Dec. 16, 2007. (Photo courtesy of Combined Joint Special Operations Task Force – Afghanistan) Today’s biggest news is that Ahmed Wali Karzai, the brother of the Afghan president and a suspected drug kingpin, is “said to be” on the CIA’s payroll. The scoop by the New York Times‘ Dexter Filkins, Mark Mazzetti, and James Risen adds even more drama to the already Hollywood-worthy tale of the Karzai brothers. The six Karzais have done very well for themselves since the Americans invaded Afghanistan in 2001. But it’s very clear from the Times story that not everyone in the US establishment is happy for the brothers. Filkins et. al. say it outright: “The ties to Mr. Karzai have created deep divisions within the Obama administration.” But you could tell that from the very fact the story exists. CIA agents don’t get outed to the press unless someone is very upset with their behavior. So exactly who is chafing at the payments to Ahmed? Sometime General McChrystal adviser Andrew Exum says he doesn’t know if the story is true, but he does know that the military establishment in Afghanistan doesn’t much care for Ahmed Karzai:

[N]umerous military officials in southern Afghanistan with whom I have spoken identify AWK and his activities as the biggest problem they face—bigger than the lack of government services or even the Taliban. And so if AWK is “the agency’s guy”, that leads to a huge point of friction between NATO/ISAF and the CIA. Again, I am not currently serving as an advisor to ISAF and cannot speak for Gen. McChrystal’s command.

Of course, as Exum points out, the military folks are already on the record saying Ahmed is a problem. The lead quote in the Times piece is from Maj. Gen. Michael T. Flynn, a top military intelligence guy and a McChrystal honcho. And later in the story, Flynn basically accuses the CIA of supporting crime in Afghanistan. “The only way to clean up Chicago is to get rid of Capone,” he says. Exum says this is “yet another example of NATO/ISAF carrying out one campaign in Afghanistan while the CIA carries out another.” Bottom line: the message from this story, and the leaks to the Times, is pretty clear. McChrystal and his team are telling the CIA they’ve had enough.

Finally, it’s also worth noting that Ahmed Karzai is not Hamid’s only powerful brother. One sibling, Mahmood Karzai, held a bizarre press conference in Washington just a few months ago where he advised President Hamid to hire an economic team and portrayed himself, in the words of Mother Jones‘ Bruce Falconer, as “propriety incarnate.” As Bruce pointed out, Mahmood owns “ownership stakes in several of Afghanistan’s biggest concerns, including a cement company, a real estate development firm, a Toyota dealership, the Kabul Bank, and four coal mines,” and the Times has suggested that he used his pull with his brother to get rich.