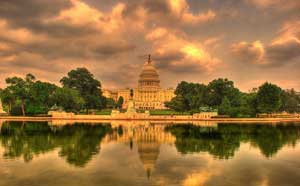 What type of vetting can you expect if you’re an ex-lobbyist for an Enron-like firm who’s been nominated to a seat on the regulatory commission that’s supposed to prevent Enron-style abuses? Not much. Exhibit A: Last week’s confirmation hearing of Scott O’Malia, a Republican Senate staffer selected by President Obama to fill an open seat on the Commodity Futures Trading Commission (CFTC).

Recently Mother Jones reported on O’Malia’s two-year stint as the director of federal legislative affairs for Mirant, an energy company that state and federal regulators—including the CFTC—accused of market manipulation, including intentionally withholding power from California consumers during the state’s energy crisis. Its shady business practices ultimately led to a nearly half-billion-dollar settlement with the state of California. In a separate case, spearheaded by the CFTC and the Justice Department, Mirant traders pleaded guilty to criminal charges in connection with a scheme to rig natural gas prices.

O’Malia worked for Mirant in 2001 and 2002, a period that coincided with the California energy crisis, Enron’s collapse, and a major market upheaval that by 2003 had plunged the Atlanta-based firm into bankruptcy. During his time at Mirant, O’Malia was registered to lobby against a measure that would have strengthened the CFTC’s oversight of energy derivatives—precisely the type of power the Obama administration now wants to give the commission, which has often been criticized as a toothless regulator. (In 2002, Mirant joined with the US Chamber of Commerce, AIG, Bank of America, Citigroup, Goldman Sachs, JPMorgan Chase, UBS, and other firms to block legislation expanding the CFTC’s authority.) In a letter [PDF] to the Democratic and Republican Senate leaders, the firms said the bill, advanced by a bipartisan group of senators, “would result in unnecessary and potentially detrimental regulation vastly expanding the jurisdiction of the Commodity Futures Trading Commission.” (The bill failed.) O’Malia was also registered to lobby for the repeal of the Public Utility Holding Company Act, a law intended to curb speculative investments by energy, natural gas, and water utilities. And, according to House and Senate records, he advocated on regulatory matters specifically concerning California’s energy market.

After Mother Jones published the story, a spokeswoman for Sen. Blanche Lincoln (D-Ark.), the new chair of the Senate Agriculture Committee, which reviews CFTC nominees, said O’Malia would be questioned about his role at Mirant. “The confirmation process exists to fully vet nominees,” Katie Laning Niebaum, Lincoln’s communications director, said. “Chairman Lincoln will address this matter in the hearing and looks forward to complete, transparent answers from Mr. O’Malia and all nominees.”

Lincoln did ask O’Malia about his time at Mirant during his confirmation hearing on Wednesday. But she did so timidly—even neglecting to mention that he was a Mirant lobbyist—and did not follow up when O’Malia gave a response that completely skirted his controversial background. In short, he was not fully vetted. Not even close.

“You mentioned in your opening statement that you spent part of your career working for Mirant Corporation, of course at a very difficult time in California,” Lincoln said to O’Malia, “and I know there’ve been recent news articles describing Mirant as an energy supplier and trading outfit that may have contributed to some of those problems that plagued California.” Noting that O’Malia had “great experience…to bring to the commission,” Lincoln tossed him a softball: “Maybe you would give us an opportunity to discuss the commitment to the commission and the mission of the commission in protecting these markets.”

Absolutely. The California experience in my time at Mirant was an important lesson. It was a painful lesson for, obviously, western energy markets and consumers in California. Many companies went to bankruptcy as a result of the markets and it was clear that manipulative trading behavior was employed to take advantage of those markets. The rules weren’t right and that exposed the weakness to it. There was not adequate oversight and there was not adequate regulation. I bring that experience to this position, and with my eyes wide open, and vow never to allow those type of behaviors to begin or occur in those markets, in any of the markets. And I think the discussion about the financial overhaul is consistent with many of the reforms the industry tried to make when it was clear that changes had to be made. There [was] a lack of confidence, there was manipulative behavior, and they had to put a stop to that. We need to continue those, and strongly enforce those. There’s no room for manipulative behavior in any of our markets and I will ensure that I’d be very effective and enforceful [sic] of those efforts.

(You can watch the exchange here by forwarding to the 78-minute mark.)

No one on the committee questioned O’Malia about his efforts to weaken oversight and regulation. Nor did anyone ask whether his work for a company with Mirant’s dubious track record might conflict with the Obama administration’s financial reforms, which include bolstering the CFTC’s authority to police speculators and manipulators. (O’Malia was nominated by Obama, but selected for the seat—which by law must go to someone who is not a member of the president’s party—by Republican Senate minority leader Mitch McConnell, in keeping with Washington tradition.) After O’Malia’s two-minute exchange with Lincoln, there was no further mention of the nominee’s days at Mirant.

When O’Malia spoke earnestly of his commitment to oversight and the crucial regulatory role of the CFTC—saying “I believe the oversight of our financial institutions and markets must be strengthened”—he went unchallenged.

O’Malia, who spent nearly a decade working for Sen. McConnell, has come close to a CFTC seat before. He was originally named to a Republican seat on the commission by President George W. Bush in April 2008. During his first confirmation hearing, that June, he wasn’t asked a single question about his role at Mirant. And in the questionnaire he filled out for the agriculture committee he made no mention of the fact that he’d lobbied for the company, describing himself only as a “director” there.

In 2008, O’Malia was green-lighted by the agriculture committee, but his nomination—and those of two other nominees—was blocked by Sen. Maria Cantwell (D-Wash.). Cantwell had no particular objection to O’Malia. Her fight was with the CFTC in general, which she said had failed to use its authority to protect the oil and gas markets from manipulation. The nominations never came to a vote.

This time O’Malia seems poised to win confirmation easily. So far not one senator has expressed any concern about putting an ex-lobbyist who pushed to deregulate energy markets on a commission in charge of preventing the next Enron-like catastrophe. If that doesn’t disqualify someone from serving in a crucial watchdog role, what would?