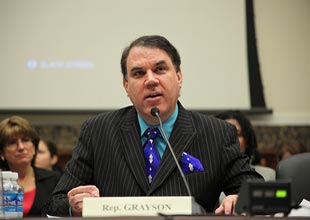 Barack Obama, the Fed, Hitler, Marxism, the government seizing control of health care, ACORN. Somehow all of this came together at a town hall meeting held in Tavares, Florida, on Monday night by Rep. Alan Grayson (D-Fl.), when dozens of Teabaggers, those rightwing activists associated with the so-called Tea Party movement, showed up to slam Grayson and vent their anger at a political world—that is, their version of it.

Two weeks ago, Grayson argued on the House floor that Republicans’ health care plan amounted to “don’t get sick,” and if you do, “die quickly.” Grayson quickly became a hero for Democrats, and a target for GOPers. He later explained that he was being facetious, but the dozens of protesters outside this event were not the least bit amused. And despite the Beltway blather, it wasn’t really Grayson’s comments that had the protesters fired up. They had been mad long before Grayson said what he said.

Jason Hoyt, Jim Jones, and Tom Tillison, three of the protesters, each explained that they weren’t there to protest Grayson’s comments. They were angry about Grayson’s support for H.R. 3200, the tri-committee health care reform bill that may soon pass the House of Representatives. All three said they had attended the Glenn Beck- and Fox News-encouraged 9/12 demonstration in Washington, DC last month, before Grayson made his famous speech. 9/12 is sort of the Teabaggers’ Woodstock: everyone says they were there, and even though the reasonable crowd estimates were around 70,000, Jones assured me that two million people showed up. (That’s just not true.)

Chuck Colley, who said he’s new to the Tea Party movement, told me that the President, who he called “Ali Baba,” is “ruining this country” by creating problems “so he can invoke more government.” Obama “wants to be the Marxist leader of this country,” the “Hitler,” Colley said.

The rest of the Teabaggers (every protester I spoke to said he was a member of or otherwise affiliated with the “Tea Party Patriots”) mostly had gripes that had little to do with Grayson’s comments or the actual state of political debate in Washington. Instead, they railed against the usual bogeymen: a government takeover of health care (not happening), Barack Obama (plotting socialist overthrow), and the Federal Reserve (a target they share with Grayson, who has cosponsored a bill to audit the Fed). None of the protesters I spoke with was particularly well informed. Jones didn’t appear to know that Grayson wanted to audit the Fed, even as he was telling me that the economic meltdown was the Fed’s fault. Hoyt, who brought a cardboard cutout of Grayson to the rally, couldn’t say why the cutout had a “Congressman from ACORN” button on its suit pocket.

Jones, Hoyt, and Tillison each voiced support for Patricia Sullivan, a local Tea Party leader who is running against Grayson. Soon enough, Sullivan was there, too, talking up reporters. “It sounds like someone is off their medicine,” she said, referring to Grayson. “[He’s] not thinking clearly.” Sullivan’s congressional run may not have the backing of the Republican establishment, but she clearly has some organizing skills: on her campaign site, Sullivan claims to have organized two 1,000-person tea parties. But there couldn’t have been more than 100 protesters, despite a pre-protest “tailgate” that was organized for the time leading up to the Grayson event.

There were counter-protesters. Bob Jenner was sporting a fedora and holding up a sign that said Grayson: n., backbone. While most Tea Partiers were careful about what they said to reporters, they didn’t always keep their muttering to themselves. “He’s a teacher,” one said of Jenner (who is). “That explains his socialist tendencies.” Another speculated that something about Jenner (his sign? his hat?) would “be good for target practice.” Jenner, who was being interviewed at the time, didn’t catch the thinly-veiled threat.

The town hall itself was fairly uneventful. The vast majority of the Teabaggers didn’t make it in, and those that did were quickly disarmed by Grayson’s stunningly softspoken manner (or perhaps intimidated by his 6’4” frame and rumors of lycanthropy). Besides, everyone already knew what everybody else thought. They’d settled that outside, with chants and counterchants. “Grayson tells the truth!” the Dems hollered.”He lies!” the Tea Partiers would shout back. So while it may have been Alan Grayson’s town hall, Joe Wilson was definitely there in spirit.