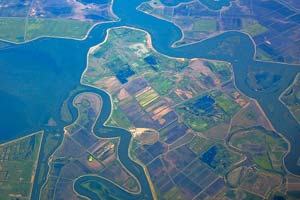 Last week, California lawmakers approved several bills that could overhaul the state’s troubled water system for the first time in 60 years. Farm interests and some environmental groups hailed the measures, fueling hopes that a generation of feuds over the state’s most vital and overexploited natural resource might soon be over. “We certainly hope that this is the beginning of the end of California’s epic water wars,” says Laura Harnish, California regional director of the Environmental Defense Fund (EDF). “It points us in a new direction, away from the brink of disaster towards a more sensible approach to solving both our ecosystem and water supply problems.”

The package of bills represents an ambitious bid to restore the Sacramento River delta, the state’s main water source. It calls for new wetland restoration projects, dams, water conservation standards, and environmental monitoring, as well as a Delta Stewardship Council that would have the authority to approve a costly new canal that might relieve pressure on the endangered delta smelt. It would fund the efforts through user fees and a massive $11 billion bond that must be approved by voters.

The Natural Resources Defense Council and Nature Conservancy also supported the bills, but the package was opposed by the Sierra Club and many smaller environmental groups that focus on water issues. Jim Metropulos, the Sierra Club’s water lobbyist, argues that the bills rely too heavily on costly infrastructure that the state can ill afford, rather than cheaper conservation measures. “What the delta needs is a heart transplant to save fisheries and help all people in the state of California,” he says, “and not just the water contractors.”

While EDF shares some of the Sierra Club’s objections to the bills, Harnish argues that the package was a tactical victory for environmentalists. She believes that the water bond, which helped the package win Republican votes, will ultimately fail at the polls, leaving behind a valuable set of new conservation and monitoring standards that don’t require voter approval. (Sarah Woolf, a spokeswoman for the water-strapped Westlands Irrigation district, expresses hope that some water projects would go forward even without bond money.)

Yet Metropulos is unimpressed with what environmentalists won. He argues that the Delta Stewardship Council lacks funding and is too beholden to Gov. Arnold Schwarzenegger, that a requirement to cut urban water use 20 percent by 2020 effectively grandfathers in some of the state’s most wasteful water users, and that key language in the bill explicitly prohibits state lawmakers from relying on a comprehensive new study of delta ecology when crafting future policies. “When you look at a lot of different details of the package,” he says, “it’s pretty deficient.”

Still worse, Metropulos says, the bill explicitly puts the needs of water consumers and the environment on equal footing, setting up a potential tangle with the federal Endangered Species Act. “Judges are still going to have to make decisions,” he says. “And it’s not equal; they will have to take sides.” The upshot is that California’s water wars are far from over, he says.

Even so, the water package has given hope to residents of the Central Valley, who, as I report in Mother Jones’ November/December issue, are living through the kind of severe drought that is likely to become common due to climate change. Increasingly, valley residents support stricter water conservation standards and efforts to restore the delta, seeing them as vital to saving their farms. The water package “is what we have been waiting for,” says Robert Silva, the mayor of Mendota, a town on the west side of the valley that saw 40 percent unemployment this year. “We need to take care of everybody.”