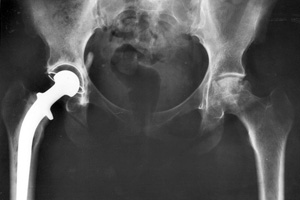 Photo courtesy of wikimedia used under a <a href="http://commons.wikimedia.org/wiki/File:746px-Hip_replacement_Image_3684-PH.jpg">Creative Commons</a> license.

So your doctor says it’s time to consider that hip replacement. Trouble is, more than a dozen firms make artificial hips, and there’ve been plenty of recalls—no small inconvenience when the recalled product resides in your pelvis. So how do you know which implant—or arterial stent, or prosthetic knee joint—performs best? Can you trust your doctor’s judgment? We’ve been left jaded, after all, by the endless reports of drugmakers’ seducing physicians with golf and spa weekends, expensive gifts, and lucrative consulting contracts. Well, now that federal investigators have quietly turned their sights on the makers of medical devices—a $200 billion industry whose marketing practices have seen relatively little scrutiny—it’s becoming clear that implant companies are just as solicitous of doctors as Big Pharma has been.

Consider Minneapolis-based Medtronic, the country’s leading device maker, which hauled in nearly $15 billion in 2009 sales despite having become a repeat target for state and federal prosecutors. In 2006, Medtronic agreed to pay the feds $40 million to settle allegations that from 1998 through 2003 it had set up sham consulting and royalty agreements, trips to strip clubs in Tennessee, and other incentives to entice surgeons to use its spinal products.

Last year, Medtronic signed a $75 million settlement related to charges that Kyphon, a firm it acquired in 2007, helped bilk Medicare of hundreds of millions of dollars. Kyphon allegedly encouraged hospitals to keep patients—mostly Medicare beneficiaries—overnight for what should have been an outpatient procedure. This allowed hospitals to bill up to five times more for the operation. Kyphon also allegedly boosted sales by giving kickbacks and perks to doctors and administrators.

Now Medtronic is again in hot water with the feds, who are asking whether the company has promoted one of its most lucrative products—a bone-growth-stimulating protein called Infuse—for purposes not authorized by the Food and Drug Administration. In July 2008, FDA officials warned that Infuse, approved only for oral, facial, and lower spine procedures, can cause severe breathing problems when used off-label for neck surgeries. The public warning, together with the probe and the resulting bad press, put a crimp in sales, prompting CEO William Hawkins to fret that Medtronic faced a “perfect storm.”

It wasn’t over. This past May, the New York Times ran an exposé indicating that Timothy Kuklo—a former Army surgeon whom Medtronic had paid nearly $800,000 in consulting fees over several years—had falsified data for a medical journal article citing an unusually high success rate in treating wounded soldiers with Infuse. He also reportedly forged the signatures of four former colleagues on the manuscript. (The article was retracted.) The company said it paid Kuklo to do other research on Infuse but didn’t review his falsified study prior to publication. In June, Medtronic revealed in a financial filing that it had received a Justice Department subpoena related to the case.

Medtronic is hardly the only device maker to fall under federal scrutiny. From June 2006 through July 2009, various industry players have paid more than $535 million to settle 11 federal whistleblower cases involving illegal marketing activities, according to Taxpayers Against Fraud, a DC nonprofit. “The medical device industry right now is where the pharmaceutical industry was five to ten years ago, both in terms of kickbacks and off-label marketing,” explains Tim McCormack, a lawyer with Phillips & Cohen, a Washington law firm that specializes in whistleblower cases. “Individual sales reps sometimes serve as concierge services for the doctors,” plying them with tickets to pricey concerts, spa excursions, and golf outings, he adds.

In September 2007, four of the top five manufacturers of artificial hips and knees—among them Zimmer Inc. and Johnson & Johnson subsidiary DePuy Orthopaedics—said they would pay $311 million to settle federal charges that they gave doctors millions of dollars in kickbacks, often in the guise of consulting fees. The government deferred prosecution of the four companies so long as they complied with the settlement terms. In a separate case, device maker Synthes didn’t get off so easy. The firm was indicted, along with four executives, for testing an unapproved bone-mending cement on human subjects—three of whom died following their surgeries. This past summer, all four of the execs pleaded guilty to misdemeanor charges.

The government is also scrutinizing doctors who moonlight for the device industry, promises Lewis Morris, chief counsel to the Department of Health and Human Services inspector general. “We in law enforcement are focusing on physicians who accept kickbacks at the same time we’re looking at companies who give kickbacks,” he says. “It takes two to tango.”

In February 2008, the Senate Special Committee on Aging held a “Surgeons for Sale” hearing to document the pervasiveness of what Sen. Herb Kohl (D-Wis.) deemed “unethical payments.” This past January, Kohl and several colleagues, including Chuck Grassley (R-Iowa), introduced the Physician Payments Sunshine Act of 2009, which would compel makers of medical devices, drugs, vaccines, and the like to publicly disclose any payment of more than $100 to a doctor; failure to report could result in fines of up to $1 million. “Studies show that when the device and drug industries have an influence on what doctors prescribe, health care costs go up,” Kohl told me. His bill, Kohl promises, “will help remove industry bias from the medical world.”

Getting device makers in line may hinge on the fate of health care reform. Kohl’s aides expect his legislation will be folded into the Senate health bill; at press time the House was considering an even tougher provision. More than 80 drug and device firms are lobbying on the issue, and many, including Medtronic, say they favor some unspecified level of transparency. But it’s also clear they’re aiming to simplify their regulatory paperwork; the top device trade group, for instance, supports “appropriate” disclosures, so long as the bill in question preempts a “patchwork approach by all 50 states.”